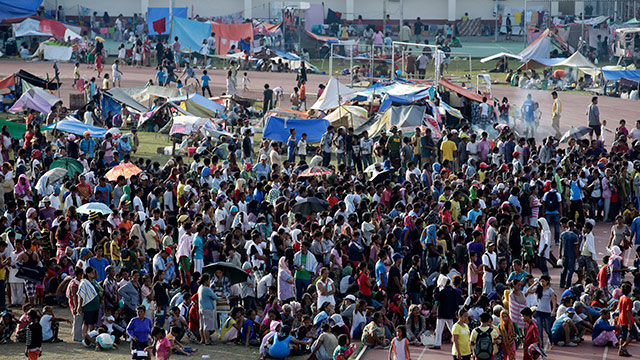 Zamboanga City, Philippines: The six member Nazarene Disaster Reponse (NDR) Team has arrived safely in Zamboanga City. The Philippine Department of Social Work and Development (DSWD) confirmed today that the Church of the Nazarene’s Disaster Response Team is the only Christian / Evangelical group from outside of Zamboanga City to be helping in the now more than week-long armed conflict.

The NDR Team is presently working alongside DSWD personnel in operating the Zambowood Evacuation Center, which has 502 families (2,253 individuals).  These internally displaced people (IDPs) are from the main area of conflict.  Some of them have lost their homes due to fires resulting from the fighting.  The number of IDPs is increasing each day, many of whom are Muslim, the predominant religion of this area.  Unfortunately, this particular evacuation center is the least served.

One of the greatest concerns is for the children who are not registered or included in the displaced persons count. The NDR Team is providing counseling and trauma debriefing for these children as well as working to address health and hygiene needs by ensuring the supply of clean water for drinking and washing. The team is also facilitating the provision of safe and clean restrooms.

Reports from the NDR Team is that the DSWD personnel are tired and starting to show signs of fatigue. Team members were able to pray for and encourage these personnel, who were extremely appreciative of the team’s involvement.

“The bottom-line of our presence in Zamboanga City is to build relationships with the people and to be the hands, feet, and voice of Jesus to those affected by this conflict,” commented Stephen Gualberto, Philippine-Micronesia Field Strategy Coordinator.

Please continue to pray for the protection of the team.  They are staying at the district parsonage of the Christian Missionary Alliance Church in Zamboanga City.  The parsonage is located very near to the area of conflict and while the team members can hear the fighting, they say that they are not fearful, but are remaining vigilant and taking all the precautionary measures possible.

“The team affirmed to us that they feel the presence of God and that their morale is high,” said Gualberto.