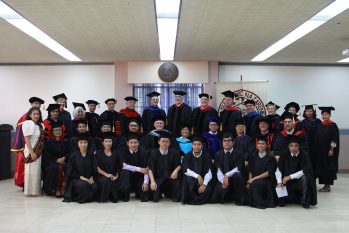 The 34th Annual APNTS graduation and commencement was held on Saturday 4 May 2019 in the Cobb Worship Centre in the Nielson Centre for Evangelism and Education building at the heart of the campus of Asia-Pacific Nazarene Theological Seminary in Kaytikling, Taytay, Rizal, 12 miles east of the Manila City Hall. The 27 graduates, who are from 7 nations and 10 different denominations, take the number of graduates from the birth of APNTS in November 1983 to 561 people from 6 continents, 24 nations and several Creative Access Areas, including the Philippines, Republic of Korea, Myanmar, Papua New Guinea, India, USA, Japan, Indonesia, Samoa, Thailand, Australia, New Zealand, Peru, Russia, Zimbabwe, Bangladesh, Canada, Colombia, Ethiopia, Germany, Kenya, Pakistan, South Africa, and Taiwan. Among graduates, 282 grads (50.3%) are from the Philippines, and 70% are from the Church of the Nazarene. More than 1,350 people have enrolled at APNTS but not yet graduated, revealing that almost 1,900 people are former APNTS students. Currently, APNTS grads and alums serve the Lord effectively in more than 27 nations and several Creative Access Areas, and 13 have been promoted to glory.

During the service, Rev. Dr. Bruce Oldham, who has served as the 7th President of APNTS since September 2016, who will become the Lead Pastor of the Winter Haven First Church of the Nazarene in Florida in May, was honored for his contributions to APNTS during his 2.5 years of leadership. Dr. Keith Killen was announced as the Officer in Charge until a new president is elected.

Atty. Rev. Kafoa Muaror, District Superintendent of the Fiji District and Chairman of the General Board, who is retiring as Chairman of the Board of Trustees of APNTS, was honored for his years of sacrificial service, as were Professors Dr. Peggy Oldham, Dr. Carol Bestre, and Dr. Clark Armstrong, who are transitioning to other ministries. Dr. Nativity Petallar was promoted to Professor of Christian Education.