On Thursday, January 16, 2020. Asia-Pacific Regional Director Rev. Dr. Mark Louw announced that after a 12-month search process, Rev. Dr. Lawrence T. “Larry” Bollinger, 50, who has been serving the Lord as Institutional Advancement Vice President at Eastern Nazarene College (ENC) in Quincy, Massachusetts, the USA since August 2016, has been elected as the 8th President of Asia-Pacific Nazarene Theological Seminary. Dr. Bollinger, who served the Lord in the Philippines with his family for 3 years from 2001 to 2004, and taught a Community Development course in the Ph.D. program at APNTS in October & November 2016, succeeds Dr. Bruce Oldham, who resigned in May 2019 to become the Lead Pastor of the First Church of the Nazarene in Winter Haven, Florida.

Dr. Louw, who is also serving as the chairman of the APNTS Board of Trustees indicated that Dr. Bollinger hopes to be on campus by the APNTS graduation in early May 2020.

Born 30 September 1969 in Quincy, Massachusetts, Dr. Bollinger is the younger son of the late Robert Frank “Bob” Bollinger, retired Associate Professor of Economics and Business Administration and former Vice-president for Financial Affairs of Eastern Nazarene College, who went to be with Lord on 7 January 2010,  and of Lucille “Lucy” Bollinger, and the younger brother of veteran Youth Pastor Brian Bollinger.

Dr. Bollinger is married to Rev. Lynne M. Sheridan Bollinger, who was ordained an elder in the Church of the Nazarene in June 2019, who has been the Chaplain at Eastern Nazarene College since June 2017, after serving previously as Assistant Chaplain for Pastoral Care and Student Missions at ENC. They have 3 children: 2 sons: Brendan, a 2016 graduate of ENC, & Jesse; and a daughter, Kari.

When he heard the news of Dr. Bollinger’s election, APNTS Professor Dr. Fletcher L. Tink posted: “He is a man with a broad smile, strong business credentials, a passion for the underdog, heavily experienced international insight, administrative experience, and easy to get along with. His selection is far superior to anyone I might have thought of.” 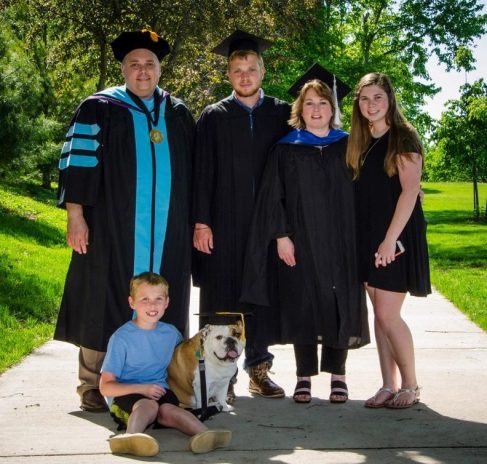 Dr. Bollinger with his wife Lynne and their three children.

In 2016 Dr. Bollinger was awarded a Ph.D. in Ethical Leadership from Olivet Nazarene University and also completed Harvard University’s Executive Training in Strategic Management for leaders of nongovernmental organizations program. Previously, Dr. Bollinger had earned a Master of Business Administration (MBA) degree in Development Economics and International Development from Eastern University in 2001, and a Bachelor’s degree in Business Administration and Management from Eastern Nazarene College in 1991. A 1987 graduate of North Quincy High School, later that year he became the 4th generation of his family to enroll at Eastern Nazarene College.

Rev. Lynne Sheridan Bollinger, a graduate of Eastern Nazarene College, has served as the director of the 365m diploma program in cross-cultural Ministries at Nazarene Theological Seminary in Kansas City, Missouri, where she has served as an adjunct teacher, is a contributing author to Charitable Discourse Volume 2, edited by Dr. Dan Boone.