Will you go beyond your walls to the least of these? See what can happen!

As Christ-followers, we need to take seriously the words of our Lord when it comes to taking care of the “least of these.”  But what does this look like when there are so many in need?  For Korean Missionary Dr. Dong-Hwan “Bill” Kwon, it meant starting right outside the walls of the Asia-Pacific Nazarene Theological Seminary (APNTS) Campus.

The Barangay (smallest administrative division of a city – similar to an inner city neighborhood) of Rowenas, is literally built up against the perimeter walls of  APNTS.  In this community of Rowenas, more than 226 families have built meager homes along the principle water source, a creek often flowing turbidly with mud from the frequent rains. 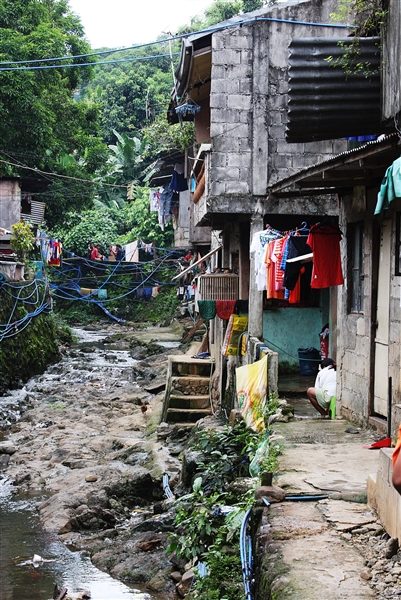 The blue plastic lines carry fresh drinking water to one out of every five homes in Rowenas.

The World Health Organization (WHO) indicates that “the quality of drinking water is a powerful environmental determinant of health.”   Dr. Kwon believed that the addressing of environmental conditions and providing assurance of clean water would be a good bridge into the community.   Little did anyone know where that bridge would end!

Partnerships build synergy and this is exactly what happened when the Metro Manila District churches, Philippine Field Office, Korean Food for the Hungry (KFHI), local barangay officials, Nazarene Compassionate Ministries, Michigan District Work and Witness and APNTS students and faculty caught the vision and became part of this outreach to those just “beyond the walls.”

The Rowenas Community Development Project (RCDP) was launched in July of 2011, with the first goal being the elimination of the mosquito borne illness, dengue fever.  Education initiatives began and the community learned the importance of correcting environmental conditions that promote mosquito populations.  The result was a tremendous success with significantly reduced incidences of the serious fever.

But more could yet be done.  Arrangements were made with barangay officials to facilitate trash pickup and recycling.  A public restroom was built to improve community sanitation along with the building of an “outpost” for barangay officials who would help with security in the area. 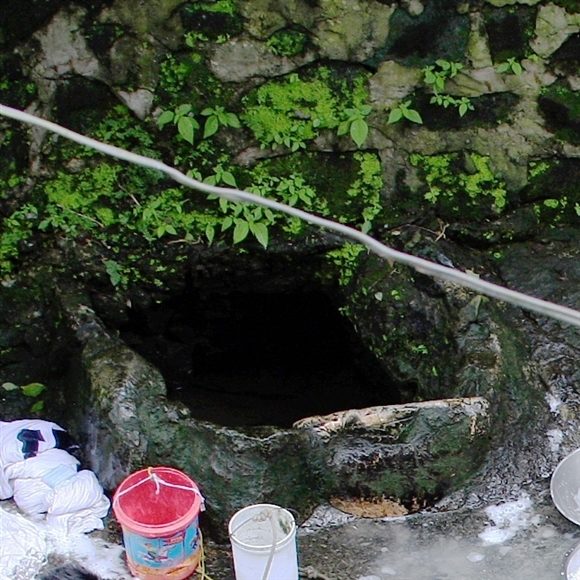 This open water well, sitting only inches above the level of the stream, is often contaminated with the rising water from frequent rains.

Clean drinking water was still a significant issue.  One open well, located just a few inches above the level of the creek, was often flooded and contaminated by muddy water whenever the rains would come.  Once again, thanks to partnership cooperation with a Michigan District W & W team, fresh water lines were run throughout the community, delivering safe drinking water to be shared, one line to every five houses.  The impact of this project on the physical health of the community has been immeasurable.

While environmental conditions are important, addressing spiritual issues are the ultimate goal. These multiple acts of compassion opened the door to the establishment and dedication of the Rowenas Community Center on February 26th, 2012.  This center houses a community day care center, community meeting place, afternoon school tutoring program and our Nazarene Child Sponsorship Program,  through which Korean Nazarene churches are sponsoring 125 children.

The center also hosts our now organized Rowenas Church of the Nazarene, which has more than sixty-five adult members and regular attendance averages between 120-150 worshipers each week.  During the dedication celebration at the church, the smiles, joy, and praise to God were true indicators of eternal success 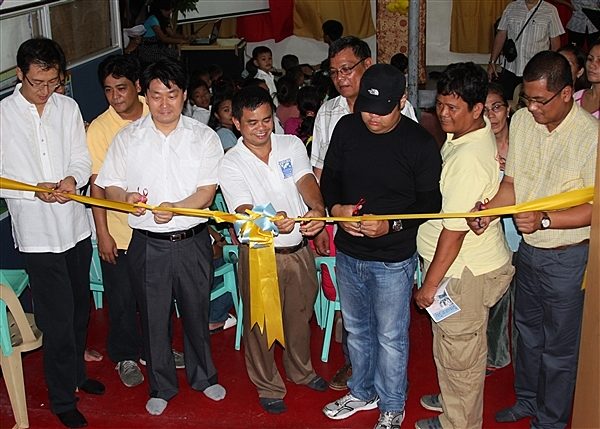 The Rowenas Community Development Project truly has been a model for success as partnerships have been established between local government officials, local and international churches, international organizations and national district leadership.

Thank you Dr. Kwon, APNTS, and all of those who went just beyond the walls of the seminary, answering our Lord’s call, “Truly I say to you, to the extent that you did it to one of these brothers of Mine, even the least of them, you did it to Me.”

To God be the glory!