At the exit of the “hot zone” at the Samaritan’s Purse Field Hospital in Central Park sits a bell. An old-fashioned cow bell. As patients were being discharged after days and sometimes weeks of battling COVID-19, they rang the bell. It was a scene of pure joy. A deathly sick man or woman was now free — free from coronavirus, free from illness, free from the restrictions of lying on a bed in a tent hospital, free to go home with their loved ones. 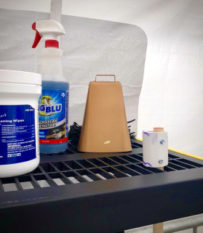 After working nearly three weeks of 12-hour night shifts in the ICU, I never heard the bell ring. I knew people in the wards were improving, but the patients in the ICU on ventilators were not leaving anytime soon. I also knew the dismal mortality rate for patients with COVID-19 requiring mechanical ventilation, but our team of doctors and nurses persevered.

Our team consisted of some of the most compassionate and competent ICU nurses I have ever known. All of them were battle-tested professionals with a long resume of domestic ICU and international disaster relief experiences. During their time in Central Park, some of them had been working 28 straight night shifts. There was only one way to describe the way they poured their hearts and lives into these severely ill patients: my nurse teammates had genuinely become like Christ in displaying His love. 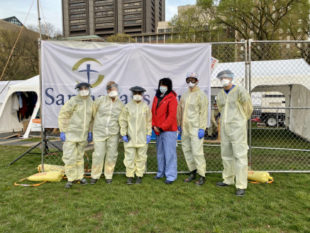 Our ICU night team, minus one who already went in.

Our patients comprised a wide variety of cultural and ethnic backgrounds. The majority of our patients spoke English, but the two most common first languages of the patients I treated were Spanish and Arabic.

“Juan” was a 65-year-old male without any previous medical issues. He came to us with COVID-19 pneumonia after a hospital in Queens started his treatment. Having only contracted Coronavirus several days prior, his illness had not yet peaked. Despite all our treatments, Juan worsened. He was transferred to the ICU and put on a ventilator. The separation was agonizing for his family. I talked with them each night and gave them updates. Unfortunately, Juan’s health continued to decline. He was requiring a gradually higher percentage of oxygen and increased amount of pressure to ventilate his stiffening lungs—both sure signs of COVID’s progression.

There came a point when I knew, Juan was going to die. We had done everything we could, including providing medicine, ventilatory support, and flipping him onto his belly (prone) to help distribute the oxygen better in his lungs.

Despite these measures, his oxygen level was drastically low. Even when taking him off sedation, he laid motionless and displayed signs that he had developed severe brain damage. His heart started to become irregular and slow. We quickly flipped Juan onto his back, preparing to perform CPR. I called the family to update them, telling them that Juan was dying. Sadly, it was evident that the family would not make it in time to say goodbye in person. It appeared that Juan would die alone. My phone call was cut short by Juan’s cardiac arrest. We quickly performed CPR, administered medicine, and his heart restarted. I called the family once again and found a way to video chat with them. Their whole family crowded around the screen to see Juan one more time and tell him they loved him. In a powerful scene that brought all of us to tears, I showed the family the six nurses surrounding Juan’s bed holding his hand. Even though he was separated, he was not dying alone. Just a few minutes later, Juan passed away.

Juan was a firm believer in Jesus. This was a new beginning, or really THE beginning for Juan. He didn’t get a chance to ring the bell, but I like to think there were bells ringing as Jesus welcomed him home to heaven. As an old hymn says…

Ring the bells of heaven! There is joy today,

For a soul, returning from the wild!

See the Father meets him out upon the way,

We wish that Juan, like some of our other patients, was able to go home to his family. However, we also know that at times we are placed somewhere to show love and compassion to a patient and their family, knowing the outcome is not in our hands, but God’s.

This piece was originally published Dr. Matt Woodley on his blog. Dr. Woodley is a missionary with the Church of the Nazarene and works at Kudjip Nazarene Hospital in Papua New Guinea. He requests prayer for Kudjip Hospital, which is short-staffed due to travel restrictions. Pray that missionaries and other volunteers may be able to arrange their return to the field soon.