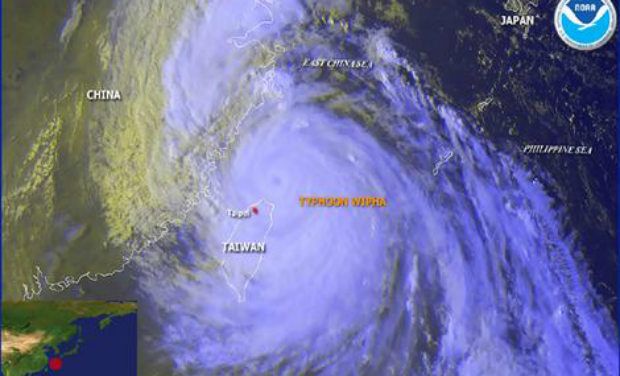 Japan:   On Wednesday morning, Typhoon Whipa was impacting the eastern shores of Japan.  Weather forecasters are calling Typhoon Whipa a “0nce-in-a-decade” storm with winds of 200 kph (125 mph) at its center.

Making the situation worse is the fact that the storm is tracking towards the area of the Fukushima nuclear power plant, which has been struggling since the earthquake and tsunami of March 2011.

Record rainfall of around 118.5 millimetres (4.7 inches) per hour being recorded on Izu Oshima Island, which lies in the Pacific, 120 kilometres (75 miles) south of central Tokyo.

All Nippon Airways and Japan Airlines cancelled a total of 45 flights, affecting 4,350 passengers, ahead of the typhoon, Jiji news agency reported.

The agency said that more than 350 domestic and international flights were set to be cancelled as the storm hits Wednesday, impacting some 30,500 passengers.

The East Japan Railway Co was also set to suspend 31 bullet trains because of the storm, according to Jiji.

“So far as I know, there is no serious damage among our churches, yet there are serious damages in some areas and over 15 lives are lost and still 40 people or so are missing,” said Dr. Ishida.

The Japan District is home to 65 Nazarene Churches and more than 4,000 full members (2012 district statistics).

Please continue to pray for Japan and the Pacific Rim, as our people have endured typhoons and earthquakes over the past two weeks.