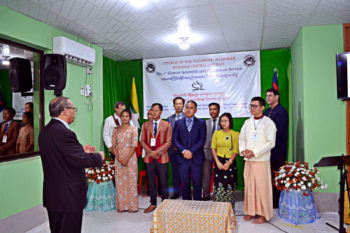 We are living in unusual times. But, even in our ever-changing, unstable world, God is still at work! God is blessing His Church! For the past couple of years, the church in Myanmar has been growing. This growth is especially true in the central area where many missionaries, church members, and laypeople have spent time working to plant churches. Now, God is doing marvelous work, and a new district is about to be birthed!

In March of this year, Dr. Eugenio Duarte officiated the first District Assembly of the Central District. Along with Dr. Duarte, seven churches celebrated the event with nearly 200 people in attendance. Dr. Bill Kwon was given the honor of serving as the first District Superintendent (DS) over the new District. As he spoke to the people, Dr. Kwon’s theme was God’s words from Isaiah 43:19, “See, I am doing a new thing!” All the delegates spent time praying sincerely for the work of the Lord to bless the District and the nation. 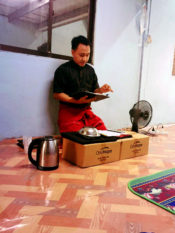 A pastor in Myanmar shares the Word

In addition to the new District, three men were ordained by the District Credentials Board, and Dr. Duarte. Here is the story of two of those men. Pastor Thana was among those who responded early to the call for church planters. He was willing to go where the Holy Spirit leads and preach the Good News. He committed himself to pioneer church planting in Burmese and Buddhist Communities. Pastor Thana introduced Moe Kyaw Naing to the Church of the Nazarene. Moe is a former Buddhist monk who met Jesus as he studied Wesleyan Theology. His understanding and interpretation of Holiness coupled with his Buddhist background uniquely equipped him to fulfill his passion: to reach Burmese Buddhist people through teaching Biblical theology. He, too, was one of the men who were newly ordained.

The birth of this District would not be possible without the sacrifices of disciples whom Jesus called. Pastor Thana and pastor Moe and other disciples have sacrificially given their lives for the Kingdom of God. When we give our lives to the Lord, the Lord will take them and use them; like the mustard seeds, our seemingly small offerings will grow into a worldwide kingdom in God’s hands. Currently, many of us feel fear due to the expansive, global nature of the COVID-19 pandemic. Many people are saying, “we are experiencing the lives that we have never experienced before.” But we firmly believe that God is in control. And we believe that God is still working through disciples who obey His call and He is still telling us, “Look, I”m about to do something new; even now it is coming.  Do you not see it? Indeed, I will make a way in the wilderness, rivers in the desert.” Is. 43:19.  Even though we may not see the way, and our lives look like a dry wilderness, God is making a way; He is doing a new thing.