One couple’s vision, Jesus Film, Compassion, Work and Witness and the Gospel…see the results!

Ibaan, Philippines:  When John and Lilia Kern were married almost eight years ago, they had no idea how God was going to use them as instruments in sharing His love…they have a much better idea today!

John and Lilia (who was born in the Philippines) are members of the Vassar Church of the Nazarene, Eastern Michigan District, U.S.   When asked this last year if they would like to participate in a work and witness trip to the Philippines, they were elated!  It would be their first W&W Trip and it would be an opportunity for Lilia to return home on a “missions” assignment.

The primary Eastern Michigan District W&W Team departed the Philippines on August 16th, and this is when John and Lilia started the second part of their trip, that of taking the gospel to Lilia’s home town.

Lilia was born and raised in Marilag, Rosario, a rural town east of Ibaan, on the southern edge of the largest island (Luzon) in the Philippines.

Double left click or right click to zoom in and out, or use the scroll wheel on your mouse

Lilia knew that there were many families struggling financially around her town.  It would be a tremendous blessing if she and John could facilitate a compassionate ministries outreach along with sharing the true hope of Salvation found in Christ.

The Vassar Church of the Nazarene caught John and Lilia’s vision and joined with them in raising more than $2,700 USD to be used in this strategic outreach.

Philippine – Micronesia Field Strategy Coordinator, Stephen Gualberto, was consulted along with the Southern Tagalog District Superintendent Marcus Eugenio.  Local pastors were engaged and a District Jesus Film Team (JFT) was mobilized.  The date was set for Friday, August 24th, 2013.  The outreach was multi-faceted and involved many partners. 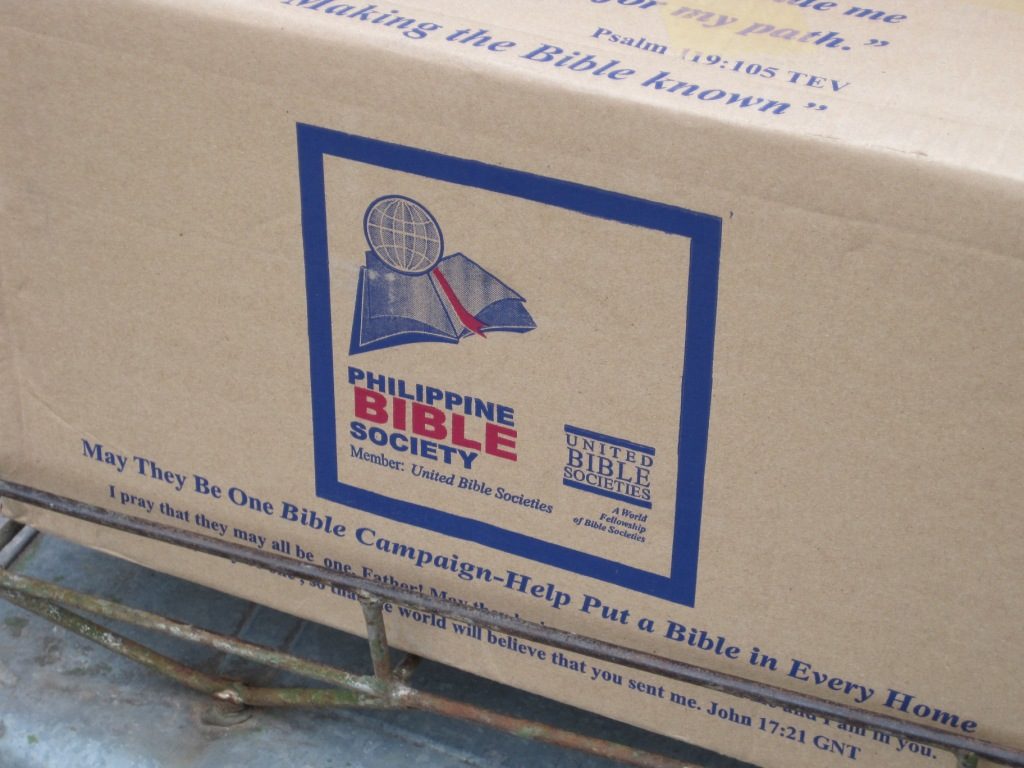 150 Tagalog Bibles and 50 New Testaments were prepared for distribution. 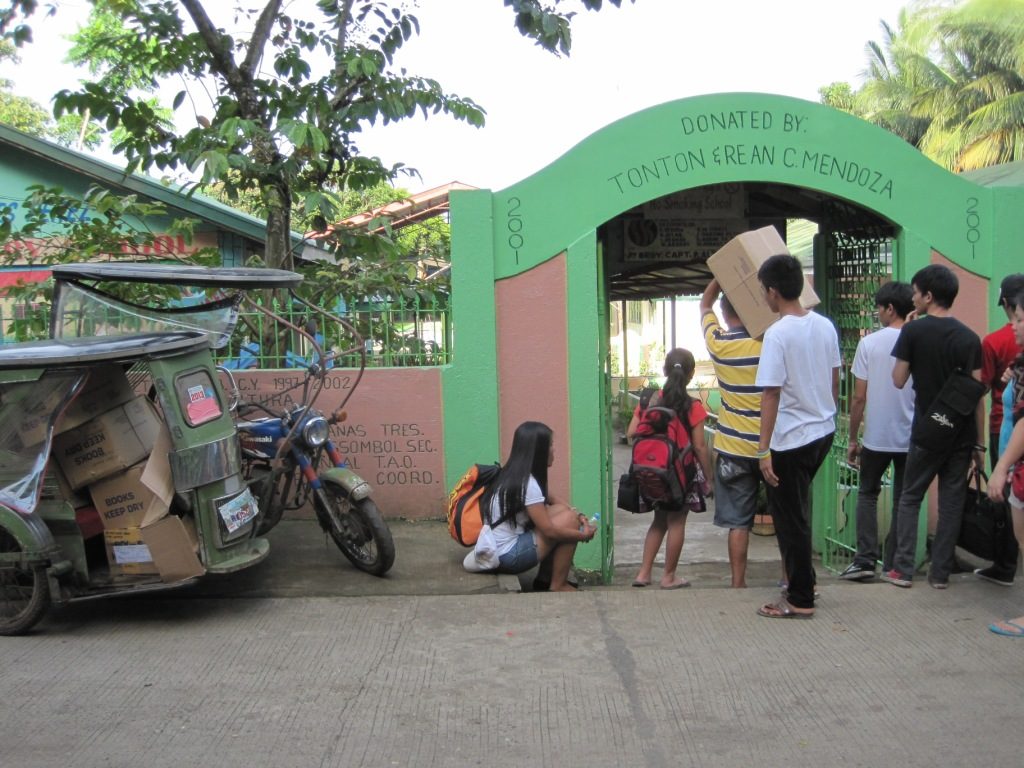 The Bibles arrive via tri-cycle at the school.

Part of the funds raised by the Vassar Church were used to purchase 150 Tagalog Bibles.  The Gideons International were contacted and they provided an additional 50 new testaments.

Barangay (town) officials were contacted, including the local public health workers, and 120 families were identified as having significant needs.  More than 120 rice and provision bags were purchased and prepared for these families. 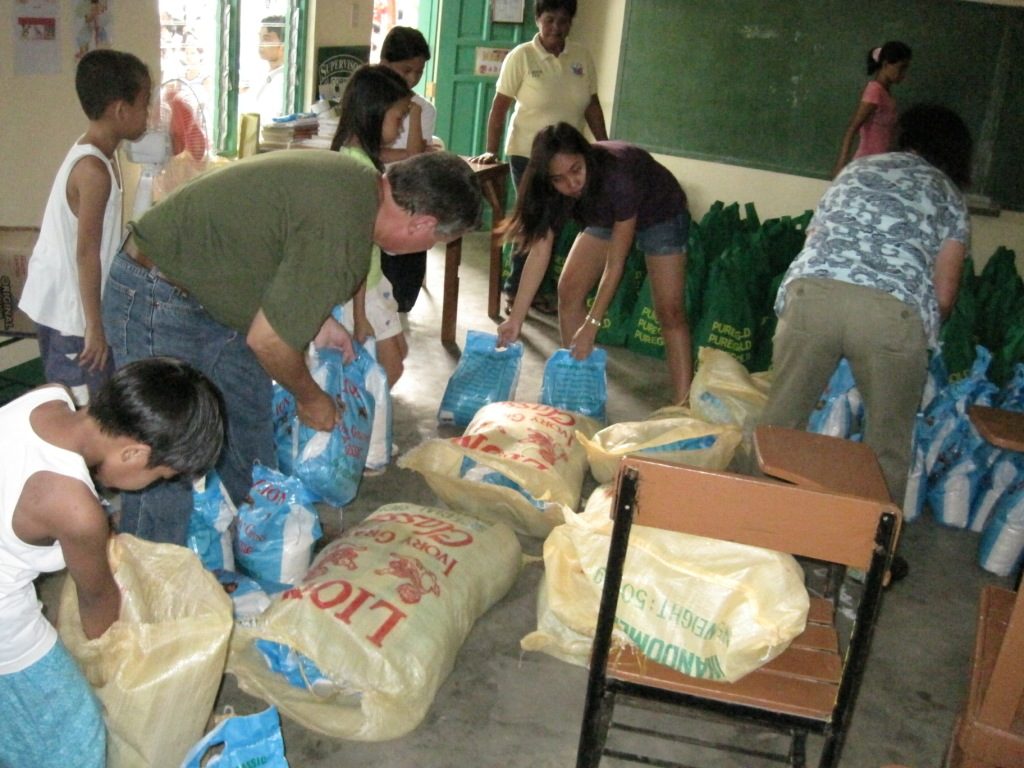 Rice and food is prepared for pre-identified families. 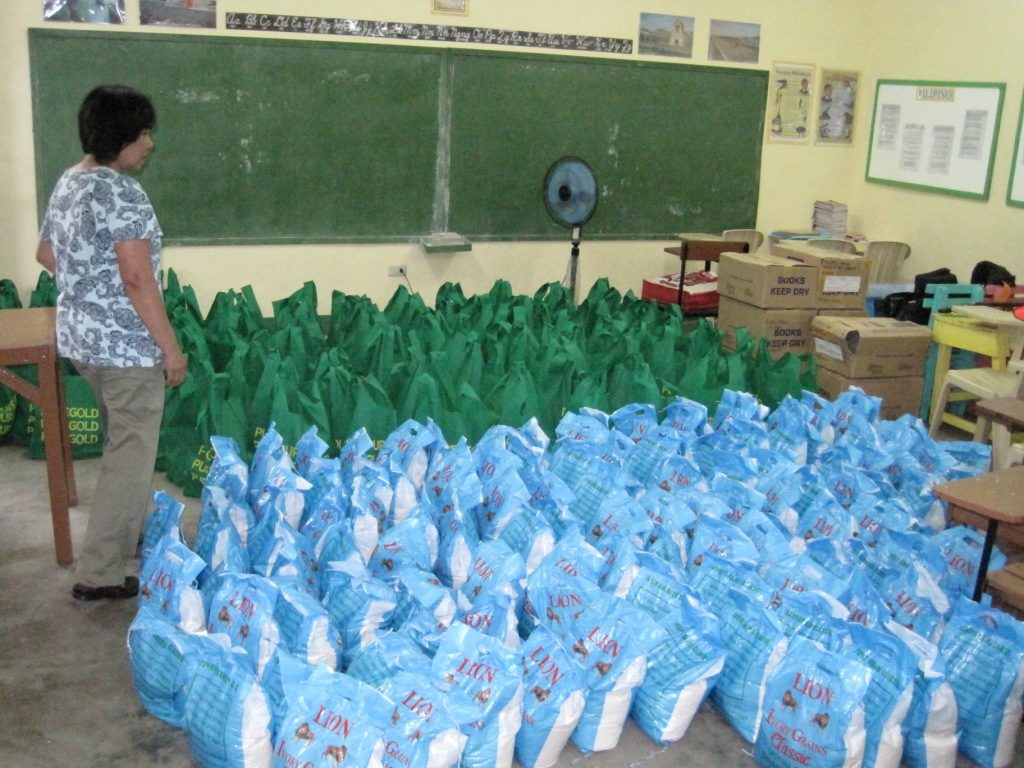 Lilia makes final counts on rice and food for distribution.

The local elementary school principal was contacted and agreed to allow the team to use the school grounds.

When the JFT arrived in the area early Friday afternoon, there was a palpable excitement in the air!   John and Lilia had already been on the ground, visiting neighbors and walking as far as six miles to invite people to a “dinner” and film. 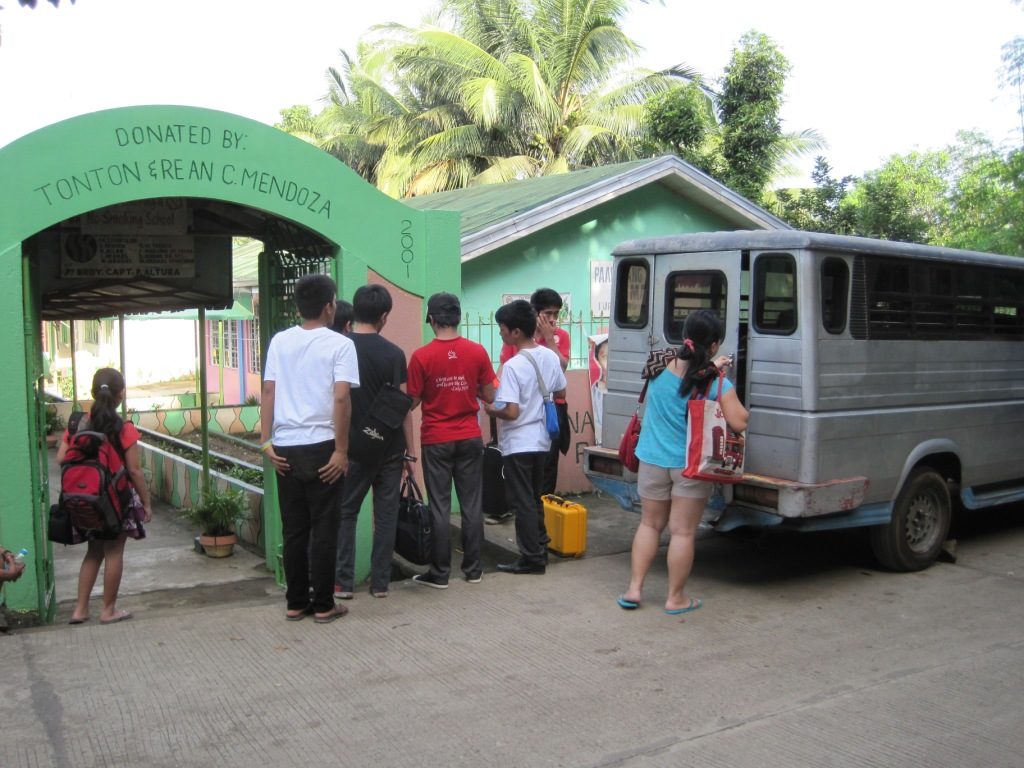 Lilia’s nephew took the lead on cooking the dinner and recruited several area men and women who prepared a traditional soup and bread, expecting to feed around 200 people.

There was a buzz of activity as tarpaulins were hung, chairs were set up, and the JFT prepared their equipment for the evening presentation.  Around 100 people had already arrived and watched from the street, excited to be part of the event.

As the night began to unfold, it became very apparent what an impact this joint partnership between government, churches (local and abroad), field leadership, district leadership, local pastors, neighbors, and a couple willing to answer God’s call to take the gospel to their home town, would make. 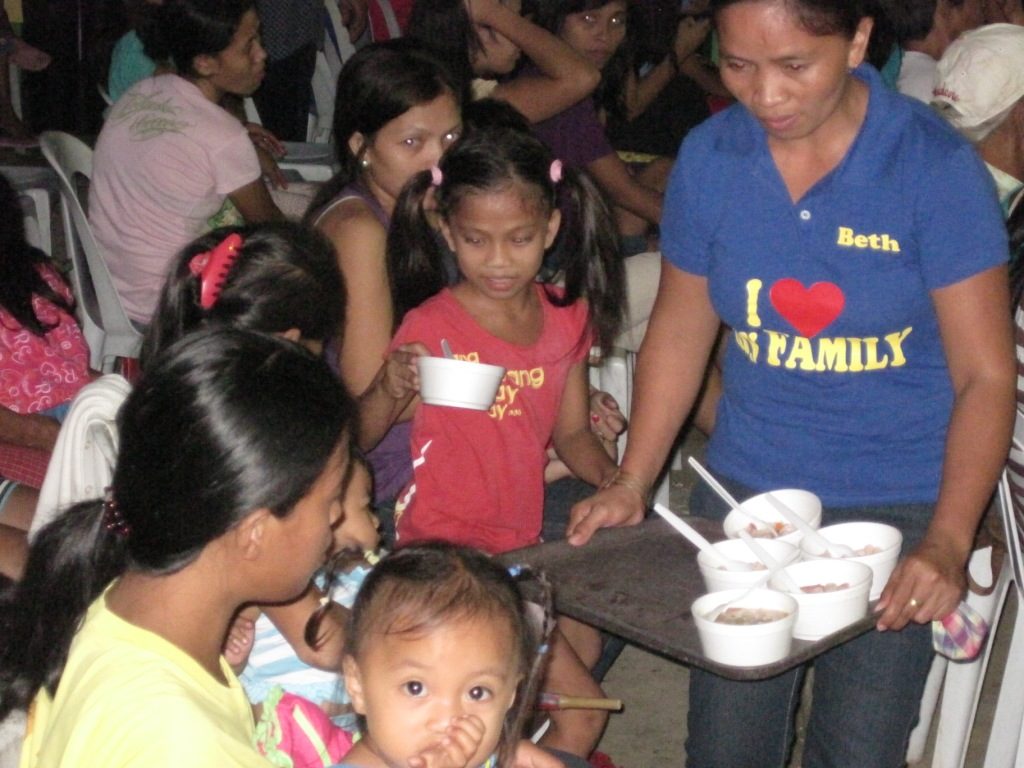 Dinners were served to more than 400!

While plans had been made to provide dinner for around 200, when those present were counted it was realized that more than 400 had been fed. 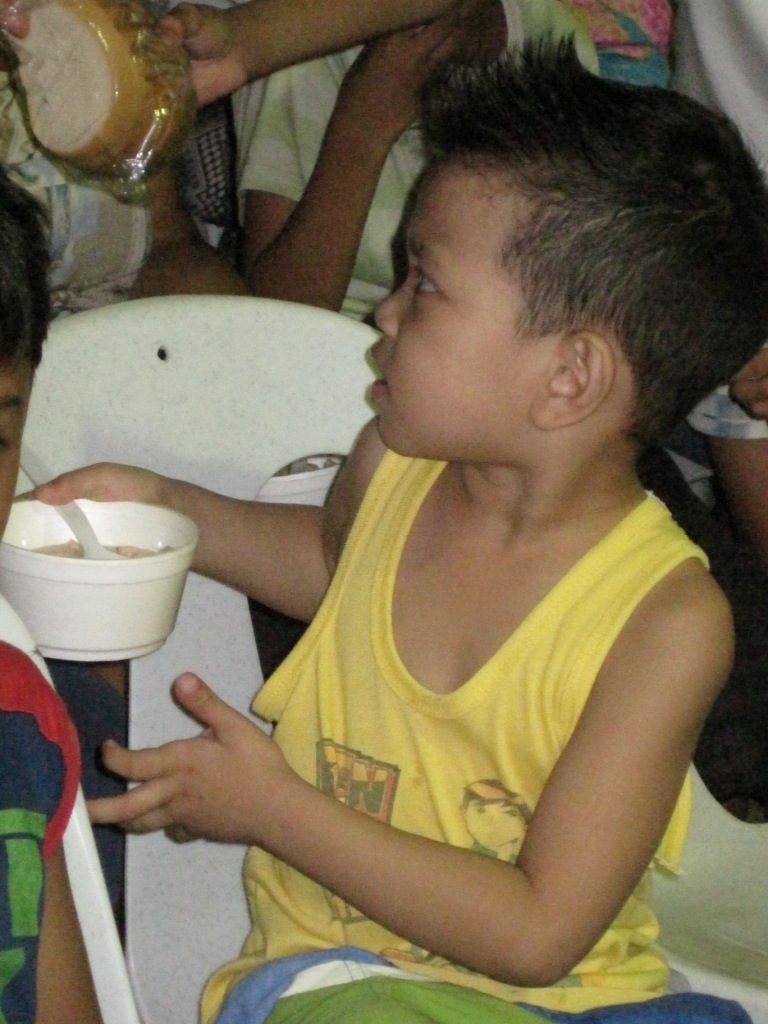 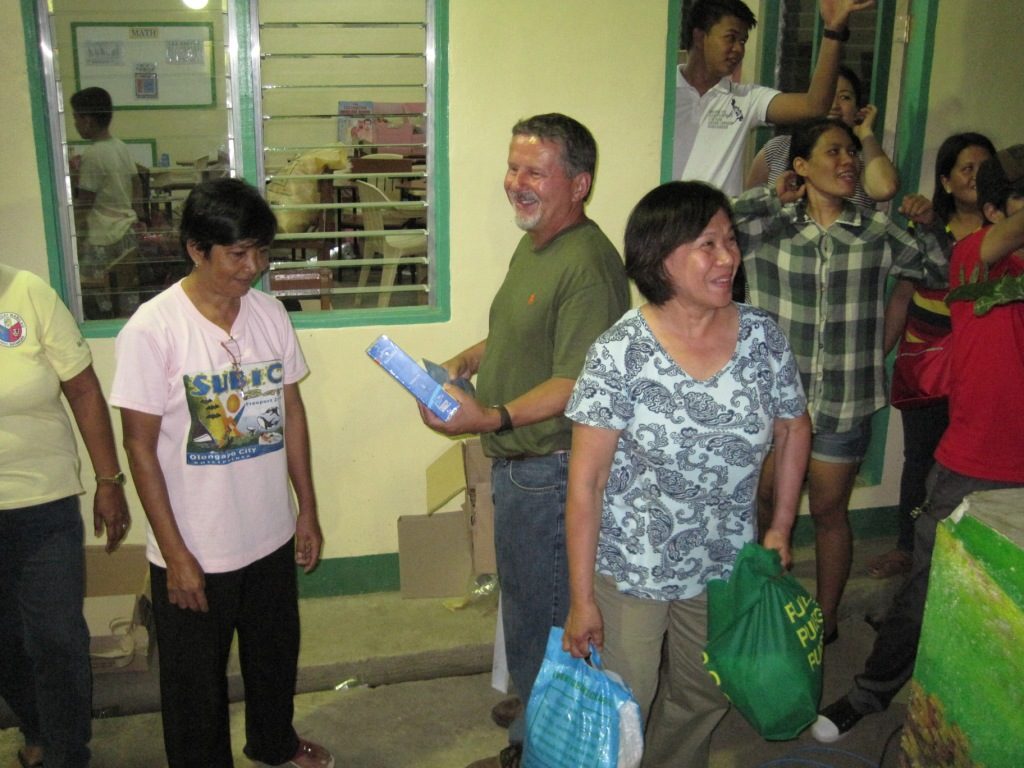 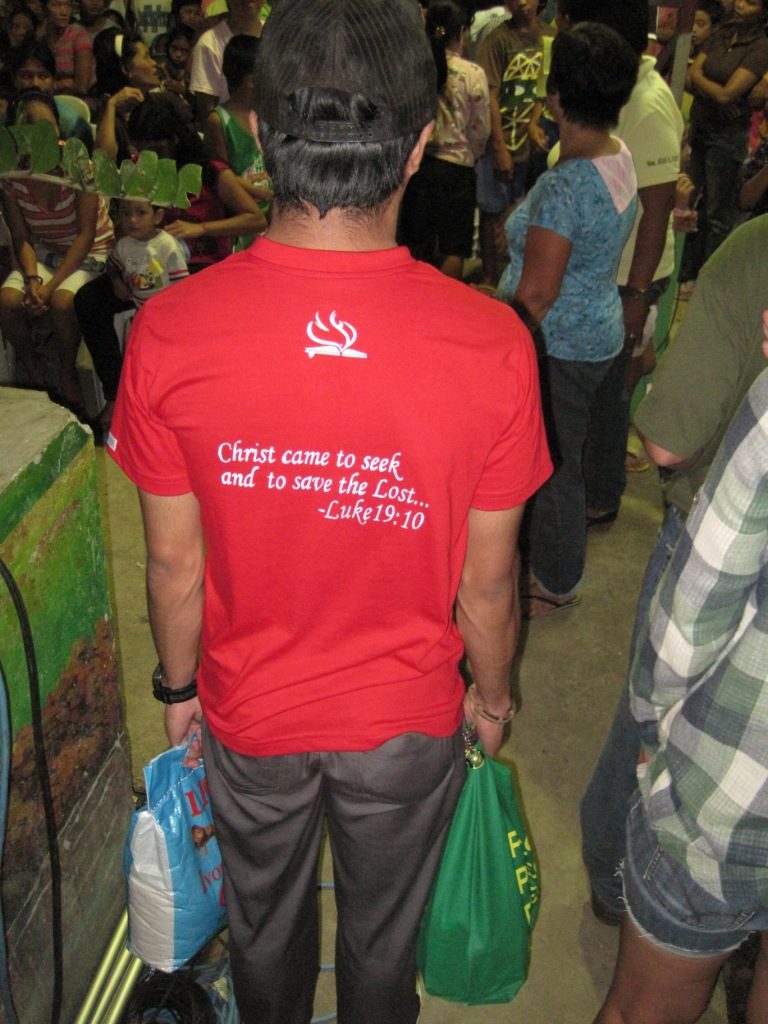 Most importantly, God spoke through the Jesus Film and this very tangible demonstration of love by a couple who came to live and spend two weeks in and among their “neighbors.”

More than 150 people came forward to pray and receive Christ as their personal savior. 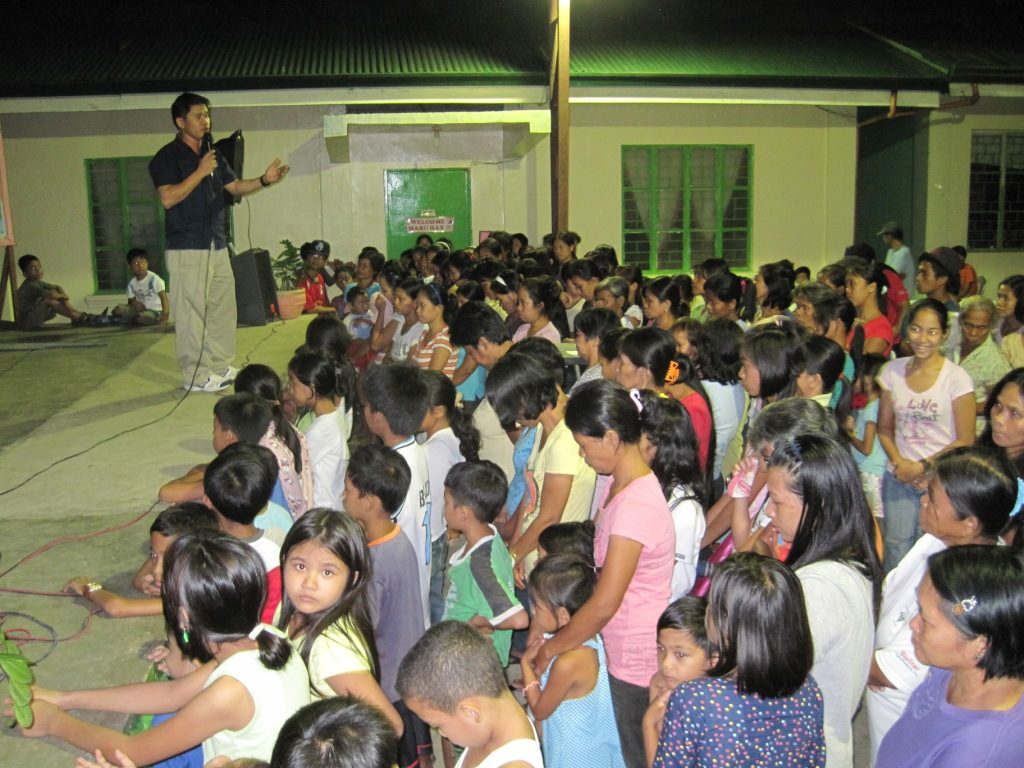 Over 150 came forward to make a decision for Christ.

John and Lilia will be staying one more week to meet with family, friends, and assist in followup. The district leadership has plans in place for ongoing discipleship of those who came forward and made the most important decision of their life.

Please continue to pray for this new work started in Marilag, for our pastors who will work to disciple the new converts, for those who made a decision for Christ, and for John and Lilia as they are here for one more week of ministry.

Thank you to all who worked together to make a lasting impact in the lives of our brothers and sisters here in the Philippines.