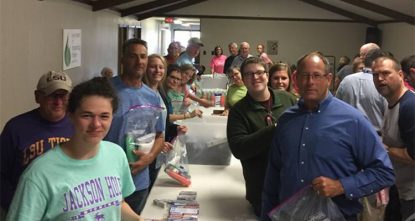 Thousands of Crisis Care Kits (CCKs) have been sent to south Texas in the wake of Hurricane Harvey and more are headed to south Florida as Hurricane Irma approaches. These disasters have virtually emptied Nazarene Compassionate Ministries‘ warehouses, and NCM is encouraging churches to assemble additional CCKs to help those affected by Hurricane Irma, as well as future disasters in the U.S. and around the world.

In the days since Hurricane Harvey pummeled communities in south Texas, more than 8,000 Crisis Care Kits have been shipped from three NCM warehouses to local churches in the affected areas. Those churches have been distributing the kits, which contain toiletries and hygiene items, to disaster victims.

One of the churches serving as a distribution center is Lake Houston Church of the Nazarene. Pastor Philip Allred said more than 500 displaced families have come through his church to receive care kits, as well as clothing and food.

In addition to the Crisis Care Kits from NCM warehouses, churches within driving distance of affected communities have been trucking in additional kits and other needed supplies. Temple First Church of the Nazarene in central Texas gathered a group of members to assemble 250 Crisis Care Kits. Once they realized that wouldn’t be nearly enough for the affected church communities, they decided to also assemble what they called “crisis care pallets.” The pallets included items needed for volunteers to clean out flooded homes, including pressure washers, generators, trash cans, fans, and shovels. Through donations from their church as well as Redlands Church of the Nazarene in south Florida and the Southern Florida District, they sent supplies valued at more than US$8,000 to south Texas.

Allred, who also serves as communications coordinator for the South Texas Nazarene Disaster Response team, said more than 150,000 homes in south Texas have been destroyed or damaged, not including apartments. Among those, more than 100 Nazarene families lost their homes in the floods, and 10 church buildings were seriously damaged.

Allred noted that the focus of the response goes beyond Nazarene churches and families.

“Right now, volunteer teams are in the [affected] communities to help clean out the homes of the elderly and low-income families,” he said.

Even as churches in South Texas continue to open their doors to flood victims, Hurricane Irma is bearing down on Caribbean countries and moving toward Florida. Churches are mobilizing to serve in affected communities.

More than 3,600 CCKs are on the way to south Florida, but more are needed. The three NCM warehouses in Maryland, Idaho, and California have only a few hundred kits left.

Churches can’t wait weeks for supplies to arrive when a disaster strikes, according to Allred.

“We have the ability to collect supplies, but we need them now,” he said.

In addition to volunteers and CCKs, financial resources are needed to support disaster response and recovery efforts.

“People don’t realize the scope of this storm,” Allred said. “The needs are great. So many of the families who lost their homes didn’t have flood insurance. They were told they would never need it—but now they need help.”

Please pray for families and individuals affected by flooding and storms. Pray for those who are most vulnerable, especially seniors, people with disabilities, and those living in poverty. Pray for church leaders and churches who are responding to the needs around them. To send a prayer or note of encouragement, go to ncm.org/pray.

Crisis Care Kits are needed for churches to distribute to disaster victims. Download instructions on packing and shipping kits here.

Churches and individuals around the world can provide support for ongoing disaster response efforts through the Emergency Relief Fund – Hurricane Response.

For additional countries, please give through your local church or district, designating your gift to Emergency Relief – Hurricane Response.