Miracle of the Shoes for the Children of Myitkyina. One Work and Witness Team Will NEVER Forget! 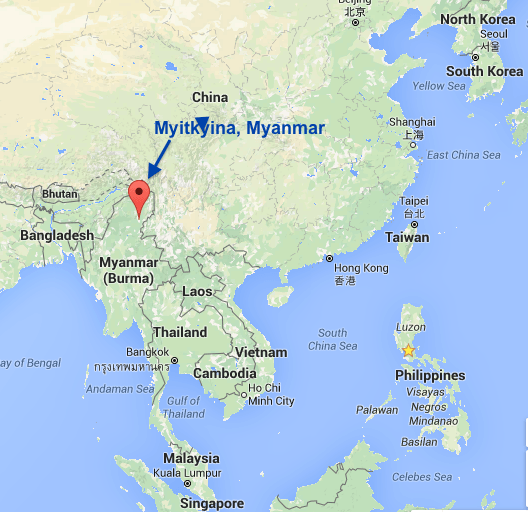 Myanmar, Southeast Asia:  Work and Witness is all about building God’s Kingdom through personal involvement, but for those who participate in these mission experiences, they find out it is so much more!  They return forever changed!

On May 21st, a Work and Witness team from Bethel Church of the Nazarene (Nampa, Idaho, U.S.A.) arrived in Myanmar.  Shortly after reaching their destination of Myitkyina (pronounced Mitchina) in the northern part of the country, the team began engaging with the local people and their incredible experience began. 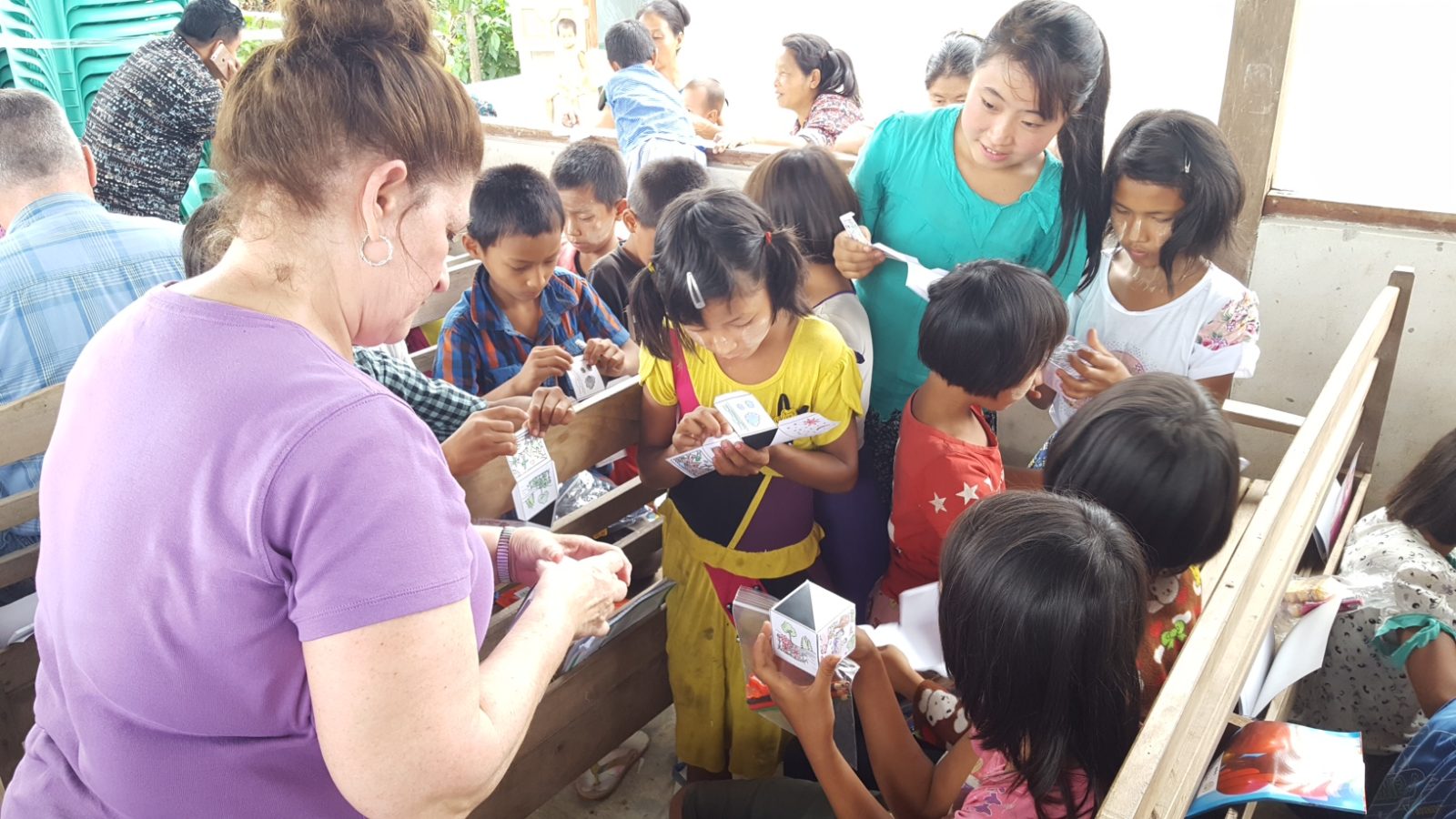 Each day around 100 children came from surrounding Nazarene churches and communities to participate in the 5-day Vacation Bible School (VBS) that the team had prepared.

The kids enjoyed games, lessons, and interaction with the team members, eagerly awaiting for the team to arrive each morning. 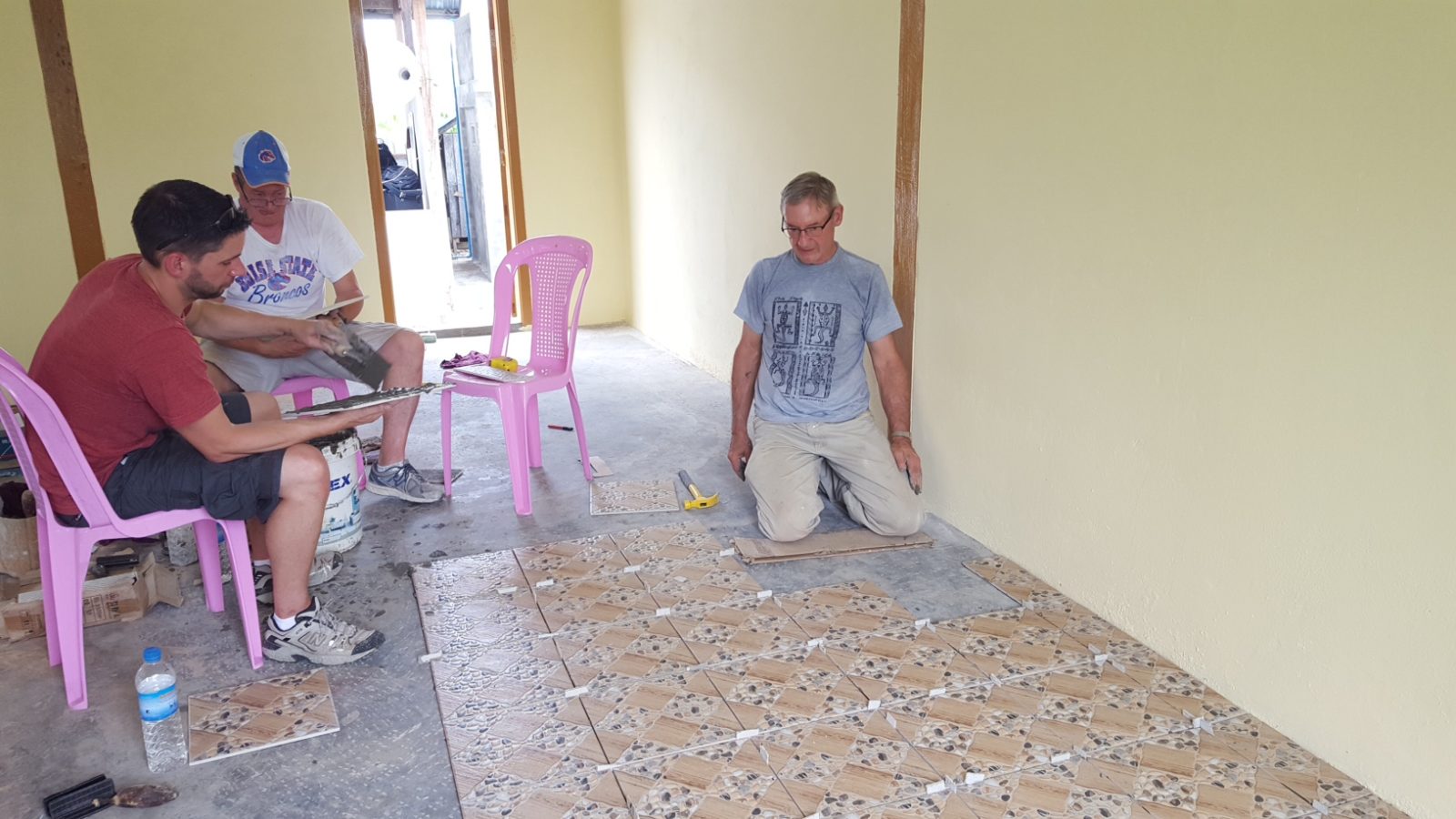 Tiling the platform of the church

In addition to the VBS, the team of 11, along with about 8 men from the Rambu Church of the Nazarene, began painting the church and tiling the floor of the platform. 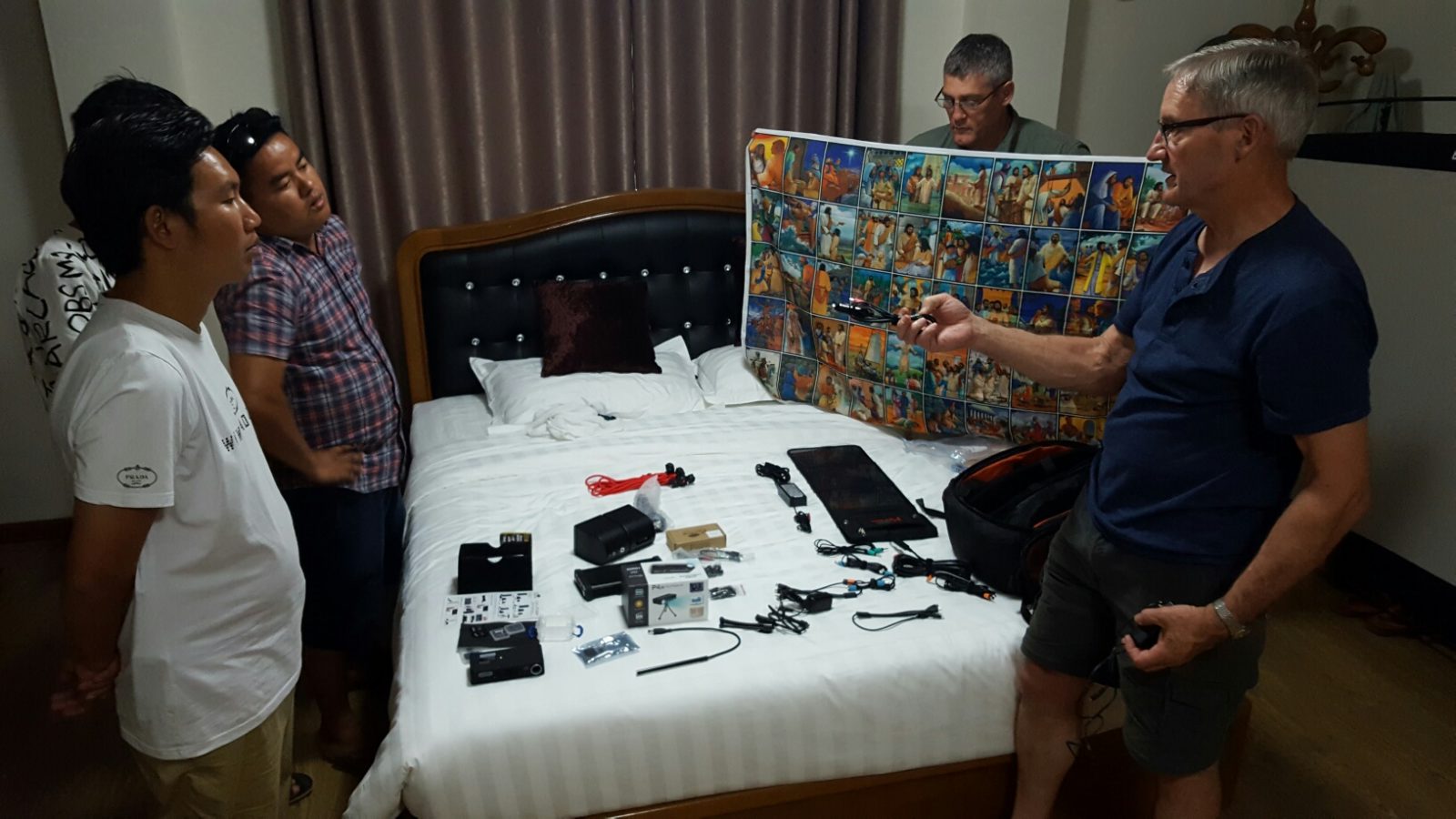 Training in how to use the JESUS Film equipment

The team was also able to partner with JESUS Film Harvest Partners in bringing in a set of JESUS Film equipment.  Three young men from the local church were trained in how to use the equipment.  During showing of the film,  more than 50 young people prayed to accept Jesus as their personal Savior! Praise God!! 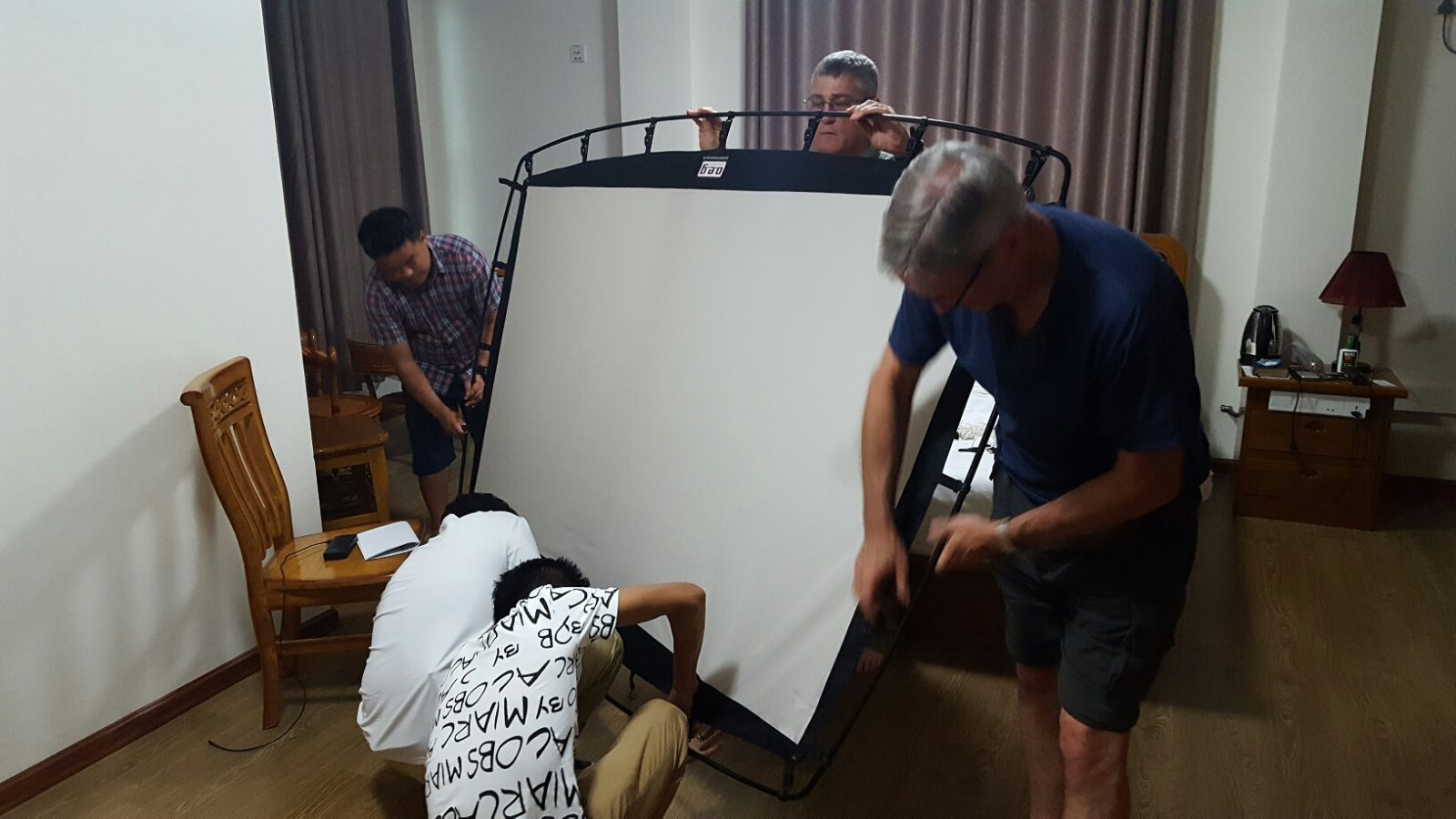 Learning to set up the portable screen

Included with the equipment were solar panels, which according to the local leadership, will be very useful as most villages where the film will be shown have no electricity.

As the stories began to come in from the team, one experience will most likely never be forgotten and that was the miracle of multiplication.

The team brought with them 100 pairs of The Shoe That Grows to be handed out to local children. These amazing shoes have tire rubber for soles and can last years for children because they can continue to be adjusted for up to about 5 years of growth and change in foot size.

HOW IT WORKS from Because International on Vimeo.

Overwhelmed with the number of children who came to receive the shoes, the team will never forget how God responded.

“We brought 100 pairs of these shoes from the states. Since the shoes come in small and large the team members handling the VBS had been sizing up the feet of the kids in attendance during the week as well as counting the number of attendees.

The packs [with goodies, toys and the Shoes That Grow] were prepared, counted and places were readied for handing out these bags.

After the start of the JESUS Film, additional kids found there way into the church to watch….we lost count of how many to expect. The JESUS Film ended and Sam [missionary DS] spoke to the kids (he is very good with all groups and has deep respect from all of these people) asking how many had made a decision for Jesus for the first time. We estimate that over 80% of the crowd raised their hands! Praise Jesus!

Sam then showed the kids a pair of the shoes and explained how these shoes would grow with their feet.  He then asked the children to line up by size. It becomes obvious very quickly that we are going to be short some bags and shoes, especially for the smaller sized feet. So we manage the kids as best we can by looking at shoe size and shift some to the larger group and we start handing out the packs with the shoes.

In Mathew Chapter 14 and again in Luke chapter 9, there are parallel versions of Jesus feeding 5,000 people from two loaves and 5 fishes. It was reportedly a young boy’s lunch. In Mark chapter 8 there is a similar story of Jesus feeding 4,000 with 7 loaves. Whether 4,000 or 5,000, 2 loaves or 7, when Jesus blesses, there is always an abundance left over.

As the children were given back packs with shoes it began to become obvious that we were going to be short. We had counted, numerous times. Team members Eric and Shane counted together. Melinda and Katie counted separately. Those leading VBS, prior to sending the kids to the JESUS Film, calculated that we had 71 large sized feet and 33 small. Do the math. We only had 100 sets of shoes. We were going to be short! There was an old man, most likely a grandpa holding a young girl wanting a bag for this precious little girl and we were out…none left.

We were trying to explain that she was really too little to wear the shoes anyway. Remember we brought 100 pairs. We had only 90 backpacks prepared. We had kids still standing in line waiting for a backpack and shoes. And we had none. Then Katie (team member) for who knows whatever reason, looked again at the bags we had used to carry the prepared shoes and packs to be distributed.   She found more, including the smaller sized shoes! We re-stocked our distribution locations and continued to give until all had received including the little girl being held by her grandfather.

Stunned, Katie and Melinda counted the remaining shoes… 21 extra pairs of shoes!!!  We don’t know for sure how many we gave out, perhaps 120 or so. Remember, multiple people counted, multiple times. We only brought 100 pairs from the states. Only 90 backpacks. And we have extra. LEFTOVERS!

Jesus still blesses today in miraculous ways! And I am witness to his blessing and miracle of the shoes for these children of Myitkyina.” – Kirk Bartlow – Team Member

This team has returned and will be forever changed.  Remember the words of Paul in Acts 20:35 (NIV)

“In everything, I showed you that by this kind of hard work we must help the weak, remembering the words of the Lord Jesus Himself: ‘It is more blessed to give than to receive.’”

In going and giving, time and time again, team members return stating that it is they who have received the greater blessing.

The Nazarene church people in Myitkyna were incredible. Their hard work, self-sacrifice, feeding us, putting tree-ground makeup on the ladies, laughter, smiles, handshakes, colorful clothing, and serious commitment to the task of reaching people for Christ was an inspiration… it humbled us and gave us a deep love for these special people in both Yangon and Myanmar. The vests they made for each team member at the dedication was a bit overwhelming to the team. Truly, we can never outgive God. – Pastor Jim Franklin – Team Leader. 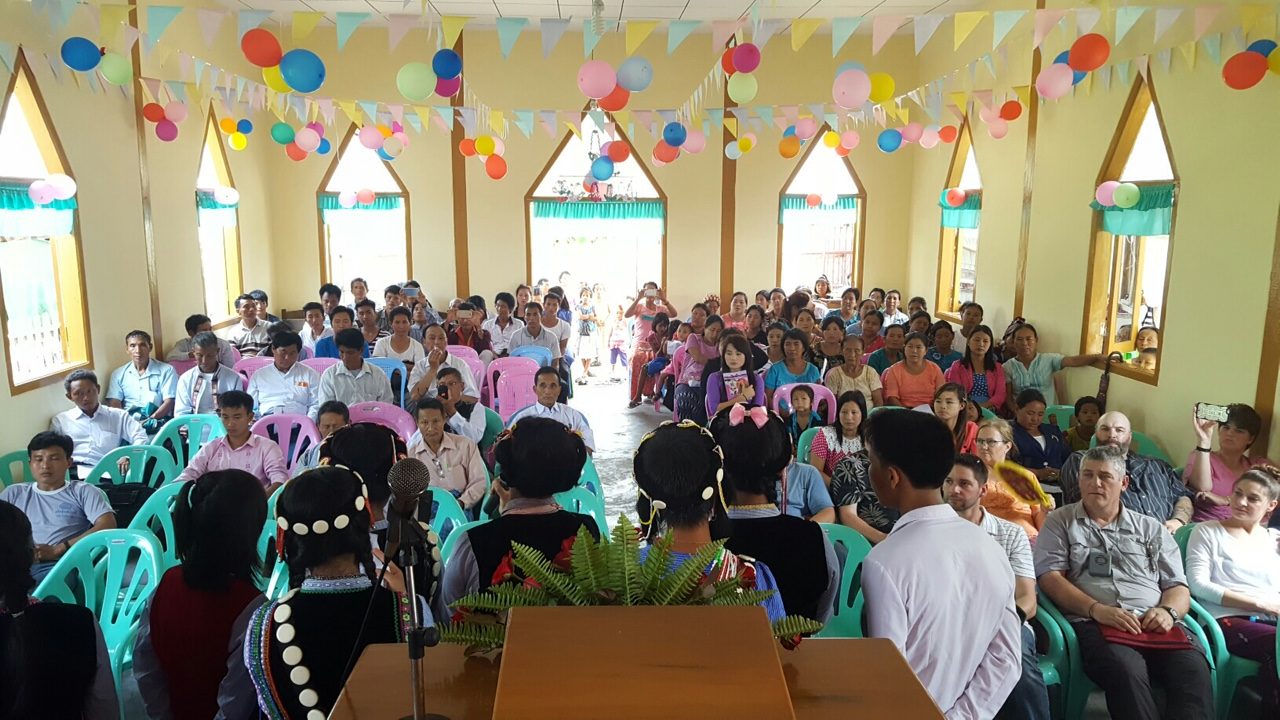 Dedication of the finished church!

On the 31st of May,  a community dedication of the new church
building was held. Hundreds attended from inter denominational
congregations and celebrated the opening of the new Rambu Church of the Nazarene.

To God be all the glory and great thanks to the Bethel Church of the Nazarene for coming and partnering with the Rambu Church, helping to establish a beautiful place of worship!

Are you ready to experience the life-changing experience of Work and Witness?  Connect with us and let the journey begin!