“Ministering to Unseen Congregation is a Blessing” 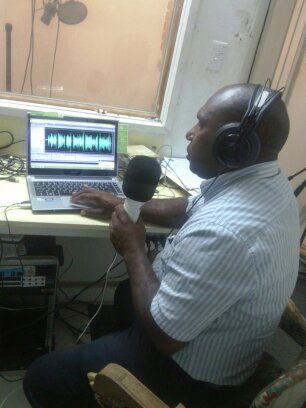 Papua New Guinea: Nazarene Radio Ministry touches many lives across Papaua New Guinea (PNG) through three radio programs produced and aired in the common trade language “Pidgin.”  With over 850 languages spoken in the 22 Provinces /States of PNG, it would be impossible to produce the programs in each language.  By using this trade language, which is a mixture of languages, they are able to produce quality programs that reach many people.

The three programs are  Krai Bilong Ol Meri (Cry of Women), Kirapim Gutpela Sindaun (Starting a Good Life) and Krais I Laikim Olgeta Pikinini (Christ Loves all Kids).  They are currently aired on 12 radio stations across PNG free of charge because of the quality of the programs.   Very soon it is anticipated that a new government owned radio station in one of the lowlands will also be airing the programs.

During the 11 years of this ministry, many letters and text messages have been received from listeners. They have shared about how the program has blessed them.  Many have reported turning from their evil ways and accepting Jesus Christ as their Lord and Savior.

“Thanks for touching my soul this morning. I had a deep, deep problem that I could not share with anybody. I was paralyzed by this problem and I do not walk around and even sometimes I do not eat. Just this morning at 9:45am I heard your program Krai Bilong Ol Meri on Wantok  Radio.  Light and the Holy Spirit brought complete healing to my quenched soul. Now I can be able to eat and walk again. Bless others as you have blessed me,” a listener wrote in from Port Moresby, PNG.

“We are doing what we are doing because souls are responding, even though we have not met them physically,” stated Rev. Daniel Eka, Radio Director and National Communications Coordinator for Papua New Guinea.

Recently, the radio ministry came to a complete stand still for almost two weeks.  The laptop computer that had been used for recording and programming for the past eight years suffered a technical problem.  Repairs were not possible and a new computer needed to be purchased.

Thanks be to God that World Mission Broadcast (WMB) stepped in and provided funding in order to purchase a new laptop.   The Asia-Pacific Region and especially the Melanesia-South Pacific Field, would like to extend their most sincere appreciation to those who support WMB around the world.

“Thank you wonderful people of God out there irrespective of your Nationality, Color, Races, and Languages for supporting us with your prayers, finances, equipment and so forth,” stated Eka. “You are playing a very vital role to plant the Word of God in the heart of the people in partnering with us. Without your prayers and support we would not be where [we] are today.”

Rev. Eka  truly enjoys ministering and supporting his unseen congregation.  He realizes that he may never know until he reaches heaven, the kind of impact he has had on his congregation.  But until that day, he will continue to preach the message of hope and the love of Christ across the airwaves of the Pacific.

Thank you for partnering with him and the Lord in this great ministry.