Lights on the Hill

“I’ve been working at this hotel for over 18 years,” said John* to me and my companion.  “In all those years, all the groups that have come here have only brought death.”

He’s referring to the groups of people that have used the luxury hotel in Southeast Asia as a venue for whatever it is they do – weddings, business conferences, etc. He calls it death. It’s a harsh term to my American ears and perhaps he meant something different in his own native language, but the only word he finds in English to describe nearly two decades of profitable business is ‘death.’

Eighteen years of death and then, in October 2015, over three hundred Nazarene representatives from the Asia-Pacific Region came to the hotel. There for an emerging leadership conference, the hotel ballroom was packed with pastors, global servants, and emerging leaders from all over the world. A smaller retreat for global servants had already taken place at the hotel during the first part of the week.  So by the time John approached us, the venue had been saturated with Christ-followers for many days.  John’s ecstatic grin and goose-pimpled arms, which he excitedly showed us, gave evidence to the joy he was feeling! 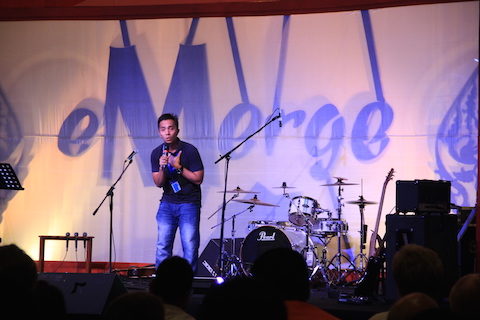 The conference was designed to recruit and prepare young emerging leaders in the Nazarene Church. It was meant to be an encouraging gathering – a place for learning and growing. It achieved its purpose. The event was successfully produced and the regional masses were properly bolstered and empowered. But something else happened there as well, outside of our scheduled program. God descended on that hotel and made it a Holy Place.

I recall now how many staff members were standing at attention along the outer fringes of the ballroom, listening to our thunderous worship services. There were more staff members there than were truly necessary and I think that this was no accident.

“You have brought life and light,” John said.

I later found out that John was a Christian. It wasn’t mere chance that he was there, in the ballroom, that night. In the same way, it wasn’t chance that God called the region to gather in that place. Not only was He moving in the hearts of those attending the conference, He was making Himself known in the city itself. He was showing the young leaders of the church how to emerge from their churches and homes and stand as bright, bold leaders for the Kingdom. This was an object lesson in how to be light in the dark.

“You are the light of the world. A city set on a hill cannot be hidden…In the same way, let your light shine before others, so that they may see your good works and give glory to your Father who is in heaven.”