Librarians from Around the World Minister in NTC-Auckland 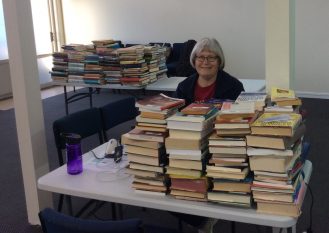 Auckland, New Zealand. For nearly three years, Nazarene Theological College has been flourishing on their Auckland campus (NTC-AKL). They had students, courses, and professors. However, they lacked a library.

Lacking a library did not mean a lack of books. For many years, Lon Dagley, a computer services librarian from MidAmerica Nazarene University, partnered with NTC-AKL in gathering books from personal collections, Nazarene libraries in the States, and from the main campus in Brisbane, Australia. He would send boxes or suitcases filled with books to send to the newly planted campus for years. Now with almost 5,000 books in their hands, NTC-AKL had no means of organizing them all for the students to use. Dagley realized he could not do this alone. 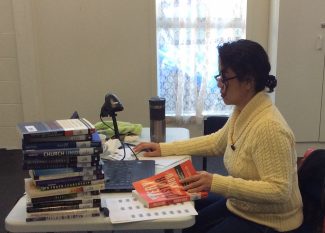 By the last day, a total of 4,400 books were ready for checkout accompanied by a newly acquired computer and scanner. Nearly a dozen bags filled with duplicate books were ready to transport for other NTC sites around the region.

“It stretched my library skills beyond their limits.” Noreen said, “It was really hard work. The impossible was made possible through God’s strength.” Fellow librarian Debbie stated, “It was a miracle we got it all done.”

Classes on the Auckland campus are underway, but now future pastors and church leaders are ready with resources thanks to book donations and the efforts of a few librarians from around the world.