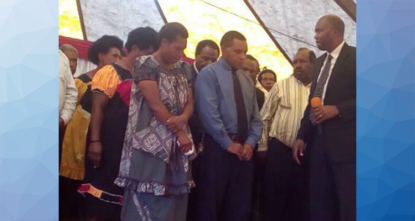 Nolie vowed to work closely with the District Advisory Board and the local congregations in his position with the new district.

Many Emmanuel Church members congratulated Nolie on his appointment. Board members George Kalwe and Kingston Kaman expressed their confidence in Nolie’s capabilities. “[He is] a very powerful preacher who played an instrumental role in ensuring the spiritual development of many of our members,” Kalwe and Kaman told The National, a PNG newspaper.

Andrew Akurs, Nolie’s mentor and superintendent of the Jiwaka South District, echoed the board members’ confidence in Nolie. “[Nolie] demonstrated exceptional leadership in the church and was an obvious candidate among church members in Jiwaka,” Akurs said.

Philip Nolie and his wife, Ruth, have six children and have been involved in pastoral ministry since 1994. Both graduated from Melanesia Nazarene Bible College in 2006 with a degree in theology and biblical studies.