How Great a Father’s Love Is 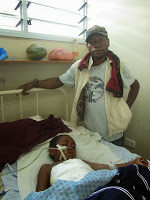 Kudjip, Papua New Guinea: She was walking with her family, near her home, through the bush of the Jimi Valley.  She was following closely behind her mom, holding a knife used to collect food from the garden and to prepare their lunch.  The wet ground and the knife in her hand made for a dangerous combination as she slipped and fell.

Her dad, walking behind her, saw her fall, heard her yell and went to help her up.  As he got to her, she told him the knife poked her and he saw the knife sticking out of her abdomen.  Having already grieved the death of one child in this remote place, he didn’t want his oldest daughter to be sentenced to the same destiny, so he pulled out the knife, picked her up and started walking.

The Jimi Valley remains a remote place in PNG that isn’t easily accessed.  Many areas have no accessible roads going in or out of them, and so the people are forced to walk for hours to get to a road where they can get a car to take them into a more populated area.  The trails they walk on are well worn foot paths through the bush, up and down the mountains that surround the Jimi Valley forged by the Jimi River.

After 2 days of walking, they finally reached a closest health center to them in the upper Jimi Valley where she got IV fluids and antibiotics.  The nurse told them they needed to go to Kudjip Nazarene Hospital for further medical attention, so dad picked her up again and kept walking.  Once he got closer to Banz, he was able to get a PMV (Private Motor Vehicle) to take them the rest of the way to our hospital.  I was finishing my dishes, when I got a call, from the volunteer doctor I was on call with, about a girl who had arrived in the ER with a stab wound.

I quickly made my way to the ER and found a little girl about 6 yo, laying on a bed.  She cried as I got close to examine her, fighting her dad who was trying to reassure her and hold her still.  Dad looked tired and obviously concerned for his little girl, as he relayed to me what had happened.  The bandage on the right side of her abdomen made it easy to identify the location of the stabbing, and seeing the abdominal tissue poking out made me wonder what else might have been in the road of the knife.  Her liver, kidney and colon all potential targets.  Her abdomen was swollen and she cried more when I examined it, she was definitely going to need surgery.

In surgery, Dr. Jim was able to locate and repair all the holes the knife had left in her small bowel and abdomen.  With antibiotics, IV fluids and time, it looked like she was going to make it.  The next day when I went and visited her, I found her dad there at her side, watching over her.  He had gotten some rest and looked relieved that the surgery was over and that his daughter was doing better.

I am thankful this dad loved his daughter enough to carry her for 3 days in order to get to Kudjip.  It reminds me of our Father’s love for each of us, who would also carry us for 3 days, and did carry us to the foot of the cross on Calvary, where we stand by, as His son laid down His life for us.  How Great a Father’s Love is.