According to Weather Underground and other sources, Hagupit is forecast to not be as bad as Haiyan, but still to be a devastating storm.

After a period of weakening on Friday, the storm has rebuilt its center from the initial 22 km (14 miles) to now 17 km (27 miles), and began intensifying again late Friday night (local time).  It is reported to have a very intense eyewall of thunderstorms. 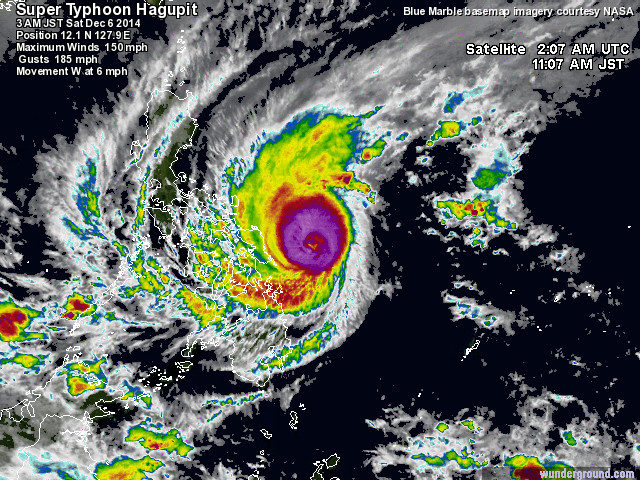 While the storm is weaker than Haiyan (Yolanda) was in 2013, authorities are no less concerned.  Hagupit is expected to move very slowly through the Philippines at about 8-16 kph (5-10 mph), resulting in  a longer period of subjecting the country to extremely damaging winds, a large storm surge, and torrential rains causing extensive flooding and mudslides.

Currently Hagupit is likely to track very close to Manila, the capital of the Philippines.

The Asia-Pacific Regional Website has developed a page specifically for live tracking, updates and social media feeds from field.   Bookmark this page at:  https://asiapacificnazarene.org/typhoonhagupit

Those in the field can submit stories and photos to this site by hash tagging your posts with: #NCMHagupit

Please continue to keep the country of the Philippines and these incredible pacific islanders in your prayers!