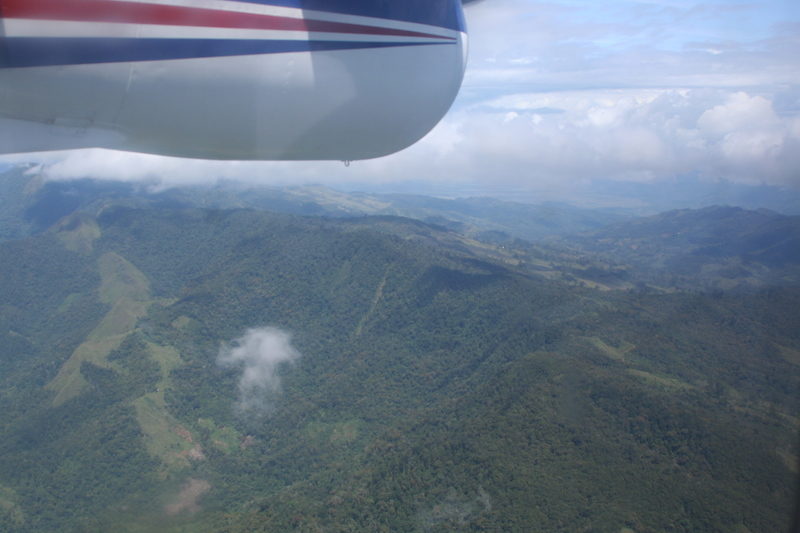 Flying over the highlands of Papua New Guinea from Mount Hagen to Dusin airstrip.

Papua New Guinea, Melanesia South Pacific:  Twenty minutes, that’s all.  Only 20 minutes to fly from the Mission Aviation Fellowship hangar at Kagamuga Airport in Mt. Hagen, Papua New Guinea, to the Dusin Airstrip, on the side of a mountain at 6,100 feet.  The flight itself is good for the soul on two counts: one being the weeks it may have taken us to walk over the sharp jutting hills that stretch over two huge valleys; and two, the scenery itself, as we fly about 300 feet above the jungle canopy, up and over the natural passes that end in a box canyon at Dusin. 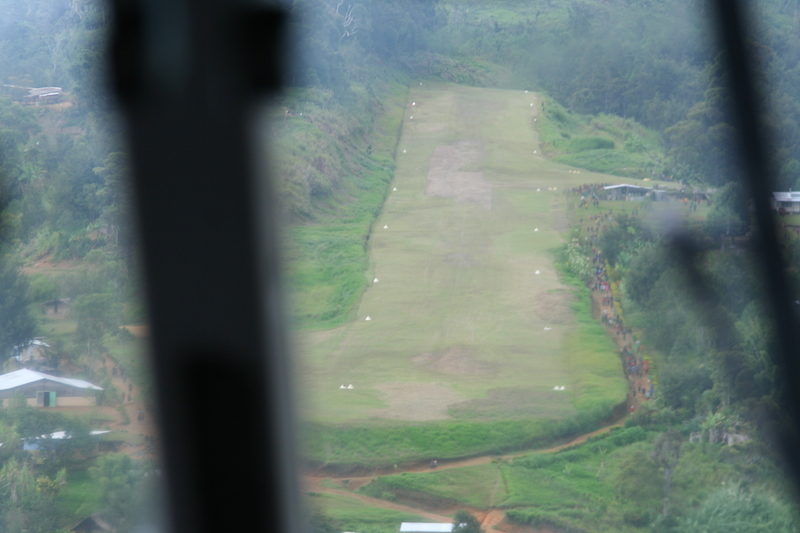 Landing at the remote Dusin airstrip which actually runs up a mountain, as seen from the cockpit of the MAF plane.

The remote airstrip was hand dug in 1970 by the Koban people, one of many previously unreached people groups in Papua New Guinea who were contacted in the 1960s by the Nazarene church.

The dry season had just started in the Highlands, but the first-ever plans to fly a doctor to work in the new, three-month-old clinic had taken many years, even decades, if you count the prayers of the first missionaries who brought the Gospel to the Middle Ramu Province. 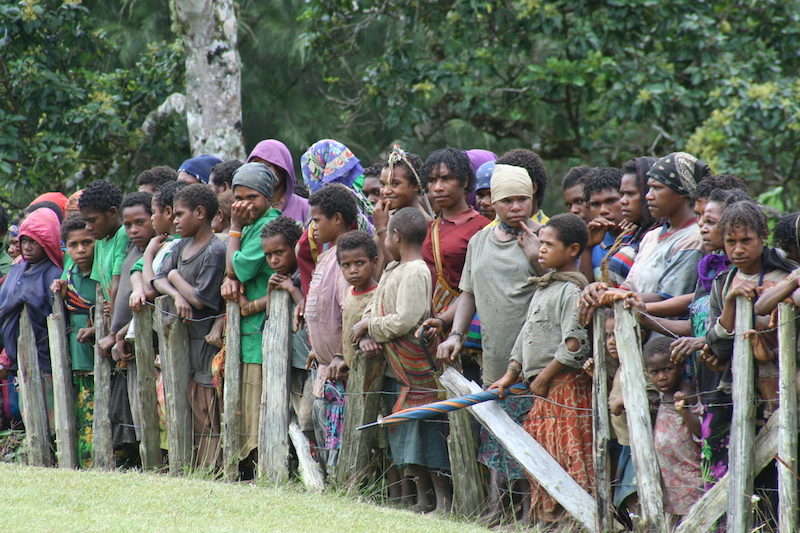 People line the fence in anticipation of the arrival of the MAF plane.

May 7 was a beautiful day, with only a few clouds. It is not unusual to see the airstrip fence lined with expectant faces to greet the people getting off the plane. In fact, it is always quite an attraction to see what will be unloaded from a plane, but today many people had come to see the doctor. 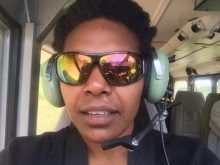 Dr. Imelda Assaigo, getting a cockpit view of the flight to Dusin.

Dr. Imelda Assaigo, a South Pacific Islander with family heritage from both Papua New Guinea and Fiji, would be in Dusin only a few days, but the people knew what an honor it was to have her visit. Joel Funfun, one of their own Dusin people, is a nurse in the new local clinic that features solar power and running water. Joel sees about 70 patients a day, some who walk three days for help. 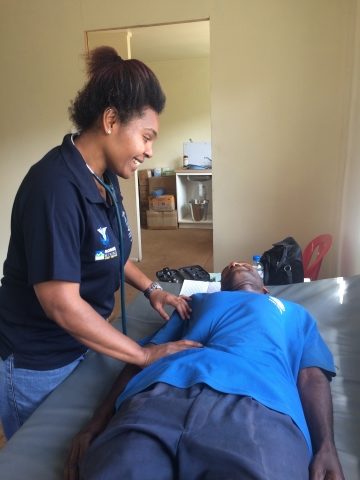 Dr. Imelda seeing a patient at the new Dusin Clinic.

The clinic in Dusin was built because of the tireless efforts under the Nazarene Rural Health Services Administrator Gabriel Mahisu. Dr. Imelda is part of the Church of the Nazarene’s partnership with the University of PNG Masters in Rural and Remote Health Program, which is raising up and training the best and the brightest in PNG, to become doctors here. The Rural Health Program includes electrical, plumbing and solar training. These skills and Dr. Imelda’s medical expertise are truly needed in a rural setting at the many hospitals all over the country.

My husband, missionary Tim Deuel, and I  (Karla) were available to accompany Dr. Imelda on the trip, and Tim happily agreed to help train her to install solar power, including the framework for the panels, connections to the electrical system, and water supply for the clinic and patients.  Dr. Imelda was herself encouraged “to be in Dusin and given the opportunity to work with Joel and understand His loving heart for the Koban and Middle Ramu people.” Dr. Imelda also commented on the Nazarene pastors who were present and praying for her, Joel and the people at the clinic. She was pleasantly surprised and said ”it was not awkward but nice to see the spiritual side presented with the physical aspect of health ministry.

The small plane and its pilot, Remy, who flew us out and back to Mt. Hagen, was also able to bring out one of the Nazarene pastor’s wives and their daughter to be with her husband in the Nazarene Hospital at Kudjip – one more blessing orchestrated by our faithful God through a global church family who love and believe Him.

Thank you for your continued prayers for Nazarene Health Ministries in Papua New Guinea.