Board of General Superintendents Announces District Merger in Australia!

Australia:  In a meeting held on December 2, 2014, the Board of General Superintendents approved the motion to merge the  Australia Northern Pacific (ANPD) and Western Australia Districts (WAD).

The name being proposed by the newly combined district board is the “Australia North and West District.”

The mission of the new Phase 2 district that has a population of almost 7.5 million people will be “to develop a network of healthy, interdependent, sustainable, holiness, local churches in the Wesleyan-Arminian tradition that make Christlike disciples throughout Queensland, the Northern Territory, and Western Australia.”

To meet the challenges of the vast district that stretches more than 3,600 kilometres (2,240 miles) from east to west, an innovative decentralised missional structure has been designed that features the distribution of the functions of the traditional district superintendent to a four-person superintendency team. At the unanimous request of the combined leadership team of the ANPD and the WAD Board, General Superintendent Dr. David Busic was invited to appoint those elected by the 18 members of the Combined District Advisory Councils.

The newly appointed leadership team is as follows:

Missional Superintendent: Rev. Dr Bruce Allder, Ed.D. 59, currently principal and lecturer in liturgy, theology and practice at Nazarene Theological College (NTC) (in Thornlands, Queensland (since January 1999) and district superintendent of the Western Australia District (since 2006). A graduate of the University of South Australia (Pharmacy 1976), Nazarene Theological College (Thornlands) (1980), Nazarene Theological Seminary (1986), and Griffith University (2006), Dr Allder was ordained in Adelaide, South Australia in January 1987. Dr Allder has served as a Youth Pastor at Inala, Brisbane, Australia; pastor in Springhill, Kansas, USA and Birrong, Sydney, Australia, before serving as district superintendent of the Australia Southern District (1994-1999), Field Strategy Co-ordinator of the Australia-New Zealand Field (1999-2010), and interim DS of the Australia Northern Pacific District in 2001. The son of retired Nazarene pastor Rev George and Flo Allder, Dr Allder has been married since 1976 to the former Jacque Dudley, a teacher’s aide and administration assistant at a Special Education unit in a public school. The Allders are the parents of the late Belinda, Nazarene missionary to South East Asia; Timothy; and Mitchell.

Pastor/Church Coordinator: Mrs Emmy Hearn, 49, currently a district manager and Queensland Learning & Development Lead for Starbucks Coffee Company with the responsibility of managing the operations of 10 stores in Queensland, Australia since 2013. Mrs Hearn’s responsibilities include strategic consulting on succession planning, leadership development, traineeships, and recruiting. A 1987 graduate of NTC Australia, Mrs. Hearn has also studied at Macquarie University and the University of Queensland. Married since 1985 to Rev. Roland Hearn, registrar and dean of students at NTC Australia, and lead pastor of the NewStart RiverCity Church of the Nazarene, a church plant in the northern suburbs of Brisbane, the Hearns have previously pastored churches in Biloela and Maryborough, Queensland, and pioneered the NewStart church in Frisco, Texas. The Hearns have 4 children: Kaylah, Jonathan, Braden and Tylah.

District Business Administrator: Rev. Steve Walsh, 53, lead pastor of the Capalaba Community Church of the Nazarene, a growing multicultural congregation in Brisbane, Queensland since November 2004. Rev Walsh also serves the Lord as the District Secretary and as a member of the Missional Leadership Team of the Australia Northern Pacific District, as well as a member of the Australia National Board and the NTC Board of Trustees. A graduate of NTC Australia (1981 and 1983), and Asia-Pacific Nazarene Theological Seminary, Philippines (1992), Rev. Walsh was ordained in January 1987 after serving as an associate pastor at the Wantirna Church in Melbourne and as the pastor of the Northmead church in Sydney, Australia. Rev Walsh served as a lecturer for 12 years at NTC Australia, at APNTS, at Melanesia Nazarene Bible College in Papua New Guinea, and in Zhejiang, China. Rev. Walsh served almost 12 years as the chairman of the Board of Trustees of APNTS, and four years as a member of the Global NYI Council representing the Asia-Pacific Region. Married since 1982 to the former Fiona Fulton, a state government administration officer, the Walshes have also pastored churches in the Philippines and Brisbane, including planting a multicultural church in Brisbane.

“We congratulate these that have been appointed and pray that the Holy Spirit will guide them as a team as we move together into the future,” shared Australia-New Zealand Field Strategy Coordinator, Dr. John E. Moore.

Dr. Allder, who will be inducted as the first Missional Superintendent at the inaugural district assembly to be held simultaneously on Saturday 10 January 2015 in both Perth and Brisbane, will continue to serve as NTC-Brisbane Principal until January 2015, or until a new Principal is elected.

Regional Director Dr. Mark Louw and the Asia-Pacific Region, congratulates the Australia Field on this new strategic move and is looking forward to the Kingdom impact of the days and years ahead!

See the official letter from the Board of General Superintendents. 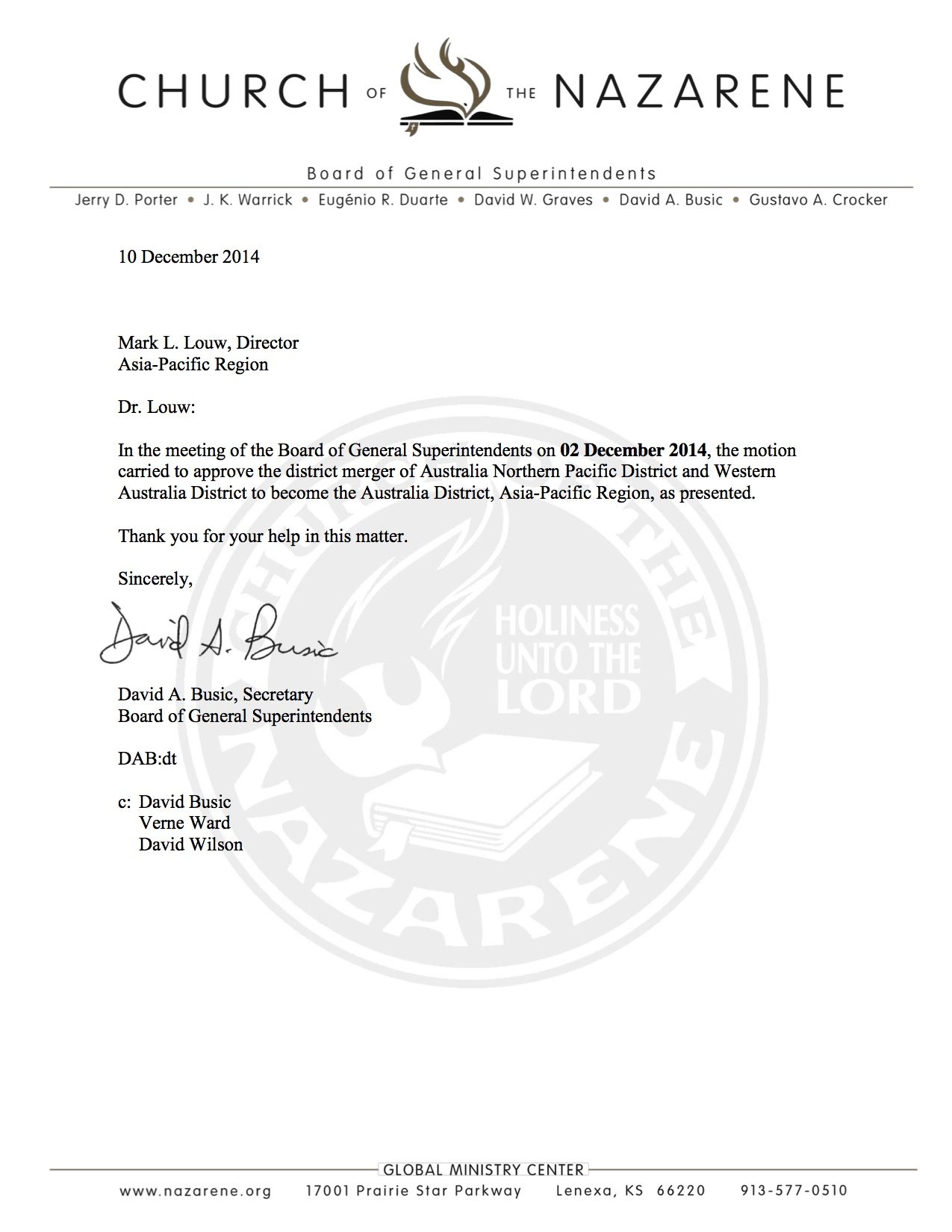