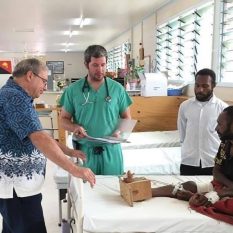 Dr. Jim Radcliffe served 33 years as a surgeon at Kudjip Nazarene Hospital in the Western Highlands of Papua New Guinea (PNG). When he spoke in churches during his home assignment tours in the United States, he often declared, “I hope to work myself out of a job.”

Little did Jim realize then that when he and his wife, Kathy, retired at the end of 2017, it would be their son Ben who took over as the surgeon at the hospital.

Back when Ben was attending the one-room high school in Kudjip, he had his own ideas about his future. “I wanted to teach history and coach basketball,” he says. “What I didn’t want was to be a missionary or a doctor!”

That changed during his senior year when he took a course on the history of Christian missions. He read about the work of Christian Medical College Vellore, in south India, and heard God’s voice: “If I asked you to do anything, would you do it?”

Ben’s answer was “yes!” He yielded to God’s call to a career in medicine. His idea then was to become a physician who would go overseas from time to time, to relieve missionary doctors.

Two years later, during revival services at Mount Vernon Nazarene University, he felt God’s call again. This time he knew God was calling him back overseas to pursue a career as a missionary doctor. 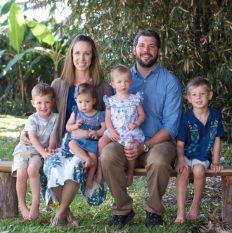 During his junior year, Ben began dating fellow student Katherine Stevens, who told him she had experienced her call to be a missionary at age twelve. They were both pre-med students. Ben graduated in 2003 and worked on campus for a year until Katherine graduated, and they married in August 2004.

They applied to several medical schools. Boonshoft School of Medicine at Wright State University invited Katherine for an interview. The interviewer asked, “Have any family members studied here?”

“Well, my husband applied here last year, but you didn’t accept him.”

The interviewer studied Ben’s file and said, “Can your husband come for an interview?”

“He’s in the parking lot—but he’s dressed in a T-shirt and jeans.”

“Tell him to come up here.”

They were both accepted—the first married couple in the history of the school.

After obtaining their medical degrees in 2009, Katherine went on to a residency in family medicine, finishing in 2012. Ben completed his surgery residency in 2014 at Ohio State University College of Medicine where his father had studied. Following his graduation, Ben and Katherine returned to PNG to assist for several months at the Kudjip hospital. The medical college held Ben in such high esteem it sent a quarter million dollars worth of medical hardware with him to the hospital.

Next, the couple applied to the Samaritan Purse’s Post Residency Program. The program funds a two-year term of service for Christian physicians and their families called to medical missions. The program has partnerships with medical facilities in many parts of the world—including Kudjip Nazarene Hospital. Ben and Katherine were asked, “Where would you like to go?”

In February 2015, they were on their way to Papua New Guinea, with their two boys, Simeon and Matthias, in tow. “When I said yes to God, I didn’t think I would go back to PNG,” Ben says. “But what a thrill it was to follow God’s leading and spend two years working with Dad.”

Jim says, “Ben’s training was superb. He took charge of most of the surgeries, and I assisted him. He is a first-class surgeon.”

An emergency developed when Katherine found she was pregnant with twins. “We would have been comfortable with the Kudjip staff delivering the babies,” said Ben. “But Katherine had kidney stones and other issues that complicated matters.”

The high-risk situation required a five-month stay in Ohio for the birth of twin girls, Tabea and Naomi. They then completed their two-year appointment and returned to Ohio for further surgery for Katherine. 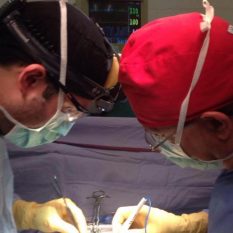 Ben and Katherine arrived back in PNG with their four children in February 2018. During their previous short stints in Kudjip, Father and son had worked together as surgeons for nearly three years. Now they are back on the island where Ben is “home.”

“I am sad my parents have moved on,” said Ben. “This is a bittersweet transition, as I won’t get to work with Dad anymore.”

“My medical ministry will benefit from my father’s reputation,” Ben continued. “He helped train PNG medical people. Doors will open to me because of him.”

According to Jim Radcliffe, his son and daughter-in-law serve a hospital that has entered a new era. Katherine, while raising their four young children, is the coordinator of medical volunteers. She handles the scheduling of medical students and residents who come to Kudjip from PNG and around the world to do training rotations, and medical professionals who volunteer at the hospital, such as with the Samaritan’s Purse program.

Ben, like his father, has a vision of working himself out of a job. He influences the lives of dozens of medical personnel who are learning from him. Kudjip Hospital participates in a program that trains Papua New Guinean doctors who work in rural and remote areas and has recently been approved as a training site for doctors specializing in general surgery.

As a doctor, Ben Radcliffe brings healing in the surgical unit. As a follower of Jesus, he lives a life glorifying his Savior.

New torches are passing into many hands.