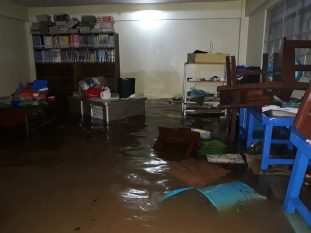 An elementary classroom flooded on the PNC campus.

Typhoon Mangkhut, the world’s most intense storm this year, hit the northern tip of the Philippines early Saturday and killed more than 80 people before moving toward Hong Kong, China, where it killed four more people. About 50 people are still missing, and the death toll could rise above 100 as search and rescue missions continue.

Winds of over 127 miles per hour and gusts of as much as 189 mph tore through the landscape. Rice and corn crops worth an estimated $177 million were destroyed, and 450 homes were damaged, with flooding in nine provinces.

The village of Ucab in the Cordillera region was hit by one of 50 landslides triggered by heavy rains. Hopes of finding survivors in the rubble faded on Monday as rescuers in the region struggled to reach dozens of people feared trapped.

Philippine Nazarene College in La Trinidad sustained serious flooding. The damage at the college and at other churches and schools is still being assessed by local Nazarene Compassionate Ministries staff.

NCM staff in the Philippines are coordinating a response in Pangasinan and Benguet with local pastors. Churches are beginning to collect supplies for neighbors in need and connecting with other local organizations to further their reach.

An assessment team is being organized to visit churches in the northernmost part of Luzon — the area most impacted by the typhoon — and they will deliver Crisis Care Kits and generators as needed.

How You Can Help

Pray
Please pray for those facing the devastation left by the storms and the ensuing floods. Pray for those who have lost loved ones and homes. Pray for those who are most vulnerable during and after the storm, especially senior adults, individuals with disabilities, and people living in poverty. Pray for the swift delivery of the supplies and care they need, and pray for the months of recovery ahead. Pray for church leaders and churches responding to the needs around them. To send a prayer or note of encouragement, go to ncm.org/pray.

Give
Churches and individuals around the world can provide support through the Emergency Relief: 2018 Storm Response. Donations will be used for immediate needs, such as water and food, as well as long-term recovery and rebuilding efforts.

For any other country, give through your local church or district, designating your gift to Emergency Relief: 2018 Storm Response.