No, the ‘Safest Place’ Isn’t the Center of God’s Will

It’s important not to misunderstand the phrase!

Corrie ten Boom, a Dutch Christian who was imprisoned for helping Jews escape the Nazis, coined the famous phrase, “The safest place is in the center of God’s will.”

Sadly, we’ve twisted a phrase that came out of great suffering into a Christian cliché—misunderstood to mean that we are somehow “bullet-proof” if we are obediently following Jesus.

Corrie ten Boom knew what it meant to follow Jesus into dangerous circumstances and suffer the consequences. She and her family were responsible for rescuing nearly 800 Jews through an underground network of safe houses.

But just after midnight on February 28, 1944, the Gestapo burst into the ten Boom house and arrested the whole family.

Corrie’s 84-year-old father died soon after in prison. Corrie and her sister Betsie ended up in a concentration camp. Later that year, Corrie watched her beloved sister die with these words on her lips, “There is no pit so deep that He [God] is not deeper still.”

When I moved with my family into a slum area in a SE Asian nation to live among the urban poor, I soon came face to face with that very hard truth that Corrie and her devout family must have grappled with: Obedience to God’s calling doesn’t earn a Christian any kind of magical protection.

We will end up in places of suffering and brokenness.

Serving God in the slums didn’t earn me protection from cancer, the death of my friends and neighbors, betrayal, robberies or any of the other struggles we have faced. In fact, we likely faced more of those things because of where we followed Jesus.

He never promised you a rose garden. He never even promised to spare your life. Frankly, you could definitely be killed in the battle.

Without a theology of suffering—I would have given up this game a LONG time ago. If my only defense against pain was a pocket full of clichés and platitudes, I’d be unlikely to last.

What puts things in perspective for me, is the reminder that I follow someone who was beaten, mocked and ultimately executed—and who invited me to take up MY cross.

This truth is the foundation of a Theology of Suffering. As Paul demonstrates, there is a cost in following Jesus…

We live in this “therapeutic” culture—even in missions and ministry circles—where plenty of people will tell you that you shouldn’t have to suffer. We’ve allowed a healthy doctrine of self-care to negate a theology of suffering.

Self-care is meant to sustain us in the battle, not become an excuse to avoid the battle.

These statements are simply not true. Nor are they helpful. Would anyone dare say these words to a soldier in battle? Would you say them to a political prisoner? Or a sailor in the midst of a vicious storm?

When the focus is on ourselves, this pursuit of what we deserve makes sense. But when we step back and look at the wider battle, then this grasping after safety and comfort seems ridiculous.

Only the bigger picture gives meaning to our suffering.

Like the metaphorical ship in a harbor—yes there is safety to be found in calm waters. But our ships were never built to float idle in a harbor. These ships were built to sail the wild seas. And at times, our vessels will be battered by relentless storms. Along the way, a few of us will probably be lost overboard. 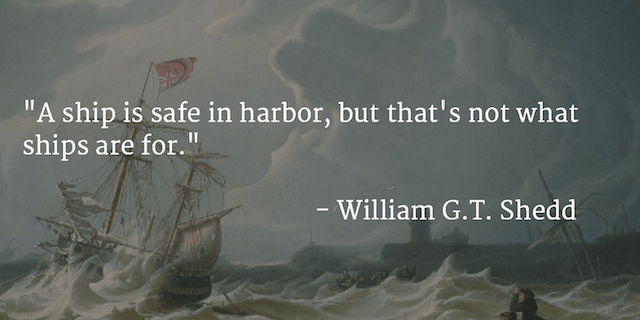 So what does God promise through these trials?

His promise is simply this: He will never leave us or stop loving us. That’s all. But it’s enough.

He is with you in the storm because He loves you. And He will never stop loving you.

Corrie ten Boom lost everything following Jesus. Her dear father and beloved sister lost their very lives in horrific circumstances. When we count the cost of following Jesus we will surely weep with both sadness and joy.

Corrie ten Boom didn’t live a safe life. She fought the good fight. She lived a wild, vibrant and FULL life of service to the most marginalized. And I know she wouldn’t have had it any other way. Because she knows the truth and so do I: that there is no pit so deep that God is not deeper still.