Nazarenes Around the World Respond to Christchurch Shootings With Love 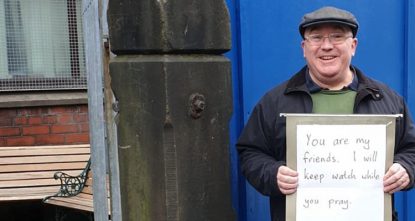 After shootings at two mosques in New Zealand took nearly 50 lives, many people shared love for Muslims around the world.

Andrew Graystone, a Nazarene Theological College-Manchester professor, was one of those people.

Graystone stood outside the Medina Mosque in Manchester, England, holding a sign that said “You are my friends. I will keep watch while you pray.”

“As people walked up, you could see in their eyes that they were looking at somebody standing outside their mosque, thinking ‘Oh no, is this some kind of protest or whatever?'” Graystone told BBC. “And then when they saw the message saying ‘You are my friend,’ their faces broke and they beamed and smiled.”

Members of the Medina Mosque weren’t the only ones surprised by the love they received — Graystone was overwhelmed by how much the photo of him had circulated across the internet.

“I hadn’t intended for anybody other than the people at Medina Mosque to know about this,” Graystone said. “I guess there are little things that lots of people can do to just express friendship rather than fear with Muslim friends and neighbors and colleagues, so I just took one little action.”

“I grieve with the Muslim communities who have lost friends and loved ones in the Christchurch mosque shootings,” Busic said. “Racism and ethnocentrism in any form is evil [and] always leads to violence. The church of Jesus Christ must reject this antichrist spirit and stand with those who mourn.”

“We stand together with our friends of the Muslim faith and abhor the evil of this event,” Allder said. “God weeps with us today as we mourn the loss of life and the loss of innocence. We pray for healing in the midst of deep sorrow. We pray for all families and friends impacted by this hate and intolerance.”

In his interview with BBC, Graystone says there are two ways people can respond to attacks like this.

Allder also believes in coming together amid tragedy and encourages Christians to refrain from responding to these actions in fear.

“At such a time it is easy to become fearful and retreat into distrust,” Allder said. “But with the optimism of God’s grace, we choose to love and open our hearts. To the Muslim community in New Zealand, today we say that you are welcomed and loved as we share life in this great nation.”

Prayer is requested for the Christchurch victims and their families.