These were the words of P’Ning, who was a stranger at the time. Her invitation was an affirmation that God has indeed sent us and was with us.

Before coming to Thailand, Terence and Ingrid Lustana prayed and pleaded using the words of Moses. Southeast Asia is unlike other places they had worked or visited. Thailand and the Thai people, specifically, a completely different playing field. They could see their limitations and overwhelming future challenges. Therefore, they were aware of the dangers of working without God’s blessings.

On their third day in Thailand as they were arriving at their condo after an orientation, Terence and Ingrid locked eyes…

“Are you thinking what I’m thinking?” Terence asked.
“I think so. Is tonight the night?” Ingrid replied.
“Yes. Tonight is the night. Let’s go.” Terence answered.

Though they didn’t discuss details, Terence and Ingrid mutually understood that it was time to go out and look for the “man of peace” they had been praying for. They turned on their Google maps and searched for the nearest Badminton court. After agreeing on the location, they found themselves in a dark, narrow alley. A few meters down was a well-lit door from which they could hear the sound of shuttlecock being hit. They entered the Eksiam Badminton Club.

“This is it. I believe this is where God wants us to be.” Terence declared.

Their excitement grew as they walked towards the reception area of the Badminton court followed immediately by a surge of anxiety and discomfort.

“I haven’t spoken Thai for 5 years. I don’t remember how to ask.”

Terence and Ingrid attempted to communicate in English but clearly, the people working at the reception didn’t understand. Ingrid tried her best to remember her Thai but didn’t translate well. Terence and Ingrid look at each other helplessly.

“Should we just go home and maybe find another place that speaks English?” Terence frustratingly suggested.

“I guess so. I am sorry. Maybe we weren’t supposed to be here after all.” Ingrid added.

Discouragement turned to joy:  “Yes! We would love to!”

“I am Terence and this is my wife Ingrid.”

Since that night, Terence and Ingrid have been regular members of Ning’s Badminton group. Ning and her husband Ei became very good friends. At the time, Ingrid was 7 months pregnant, so Ning always brought fruits for Ingrid to eat “to make the baby’s skin fair”. When the baby was born, they visited Terence and Ingrid in their home. They shared gifts, time, meals, stories, and prayer.

As Terence and Ingrid continue to pray for God’s leading in Ning and Ei’s life, they have extended their relationships to the other members of the Badminton team. Within just a short period, Terence and Ingrid began to notice God’s impact on the team.

When Terence first started playing with the team, he brought something from the Filipino badminton court: the high five. At first, the Thai people (who are used to bowing to say hello, thank you, please, sorry, and goodbye) didn’t know what to do with Terence’s high fives. If his teammate messed up and cost them a point, his teammate would immediately bow in apology. But Terence would just smile and offer a high five. If they won a point, smile and high five. The confused faces started turning into grins.

Although one Thai teammate made fun of Terence and tried to show how dumb the high fives were, people slowly started wanting to play more and more with Terence. Soon, they were initiating high fives when Terence would slip up a point or gain a point. 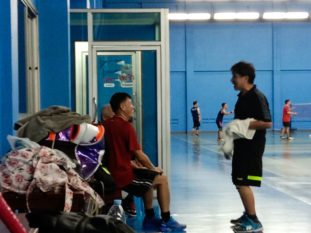 One night, Ingrid saw another match–one in which Terence was not playing. A new member had joined the team and had messed up. She quickly apologized through bowing, but the veteran member waved her off and offered a high-five instead.

It Takes a Village to Do the Work of God

As Terence and Ingrid’s relationship with the team grew, God led them to the next step of this ministry: sharing the passion and vision with a local church. Those most effective at reaching the Thai people for Christ are Thai believers.. Oikos Church of the Nazarene was the church that the Lord impressed to Ingrid and Terence. The passion and vision were met with great enthusiasm by both the senior pastor Rev. Phanom Wongsuriya and the church.

Rev. Phanom, Ochana (Phanom’s daughter), and Rampai Boodsabun (a member of Oikos) became regular members of the Eksiam Badminton group. They quickly established significant relationships with the Thai Buddhists on the team.

“Within a short period, they have established deeper relationships than the entire time we were with the team.” Terence and Ingrid affirmed.

Today, Terence, Ingrid, and Oikos Church continue to play and pray with their Thai Buddhist Badminton friends. Every night before and after practice, Terence and Ingrid pray for “just one” person to know the Lord. After that one, they will pray for another one and another one, until the whole world knows.

That one may not come in the time of Terence and Ingrid, but those who come after. But it is okay for Apostle Paul said in 1 Corinthians 3:6-9, 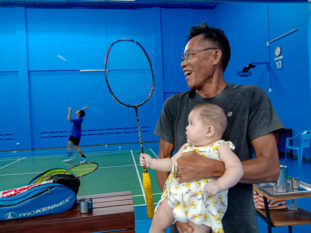 Continue to pray for this ministry. May we truly witness “just one” rise from this work. God willing, may a church spring out from the badminton court.