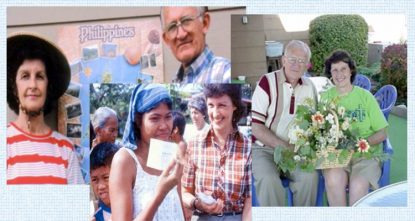 Retired missionary Pete Burkhart passed away 1 August at age 91. He and wife, Meryle, served as missionaries in Guyana and the Philippines in addition to pastoring in Washington and Idaho, USA.

In January 1962, Peter and Meryle solidified their call to missions and accepted an assignment to Guyana, where they served for 10 years. The Bukharts next pastored a church in Nampa, Idaho, now known as Karcher Church of the Nazarene.

The couple re-entered missionary service in 1976 and were assigned to the Philippines. They stayed in Manila for the first four years and moved to other provinces until their retirement in 1992.

“I have several great memories of the Burkharts in the Philippines,” Gualberto said. “Peter became our district superintendent at Southern Tagalog District when I was a teenager. Meryle was a great Sunday School teachers’ trainer to us in the district.”

“In the Philippines, they initially served in metro Manila planting churches,” he said. “Both the Central Church in Quezon City and the Taytay Church were among the products of their ministry. They lived on and tended to the campus of what was to become APNTS.”

Peter is survived by his five children. More information will be posted as it is made available.

A memorial service is planned for Friday, 31 August at the Karcher Church of the Nazarene, 2515 W Karcher Road, Nampa, ID 83651.

Prayer is requested for the Burkhart family.

Information used from Asia-Pacific Region report on the life of Meryle Burkhart
This article was originally published in NCN News.