First Woman Ordained in the Philippines Passes Away

Rev. Ricareda “Rica” Verceles Valuenzuela, a retired pastor who was the first woman to be licensed to preach and later to be ordained in the Church of the Nazarene in the Philippines and the first Asian representative to the General NWMS Council of the Church of the Nazarene, went to be with the Lord on 21 August 2019 at the age of 81 at the University of Washington Medical Center in Seattle after suffering a cardiac arrest a few days earlier.

The widow of former the first Filipino District Superintendent of the Philippine and Metro-Manila Districts Rev. Andres Castro “Andy” Valenzuela, who went to be with the Lord en 30 October 2018 at the age of 85, they are survived by their two children, USAF Chaplain Lt. Col. Abner Valenzuela and Dr Brenda Valenzuela Fortune; and five grandchildren: Brenica, Doren, Cariza, Ged & Deo.

Born on 18 April 1938, Ricareda Verceles was the daughter of the late Francisco T. and Adriana O. Verceles, and the sister of Primo “Tobal” Verceles; former Luzon North District Superintendent Rev. Alejandrino “Alex” Verceles; retired Nazarene pastor Rev. Camilo Verceles; the late Zenaida Verceles Urquhart; and the late “Leoning” Henrina Verceles Pido. Raised in a strict Roman Catholic family in Binalonan, Pangasinan, Rica resented religion because her grandmother used to beat her across the legs with an oversized rosary whenever she was late for Angelus. When she was 13 Nazarene missionary Rev. John Pattee conducted a four-week revival campaign in a new structure of nipa and bamboo close to their house. Despite her initial fear, Rica’s curiosity at the amplified music and speaking being broadcast throughout the neighborhood got the better of her, and one night she ventured into the “church” even though she had been taught that it was a mortal sin to do so. Hearing the gospel for the first time and being convicted of her sins, according to C. Ellen Watts, “Ricareda’s little brown feet became caked with mud as she slid from the bench and walked to the front. Kneeling there, muddy feet and all, she invited Jesus into her heart.” That night Rica shared Christ with her sister Henrina, and soon the entire family were Nazarenes, including her mother, aunt, 3 brothers, and 2 sisters. 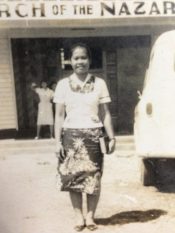 After studying at the Binalonan High School in the Class of 1953 and graduating from the Manaoag National High School in Pangasinan, with the encouragement of Rev. Pattee, in August 1956 Rica enrolled at the then Fitkin Memorial Bible Training School (later Luzon Nazarene Bible College and now Philippine Nazarene College) at La Trinidad, the provincial capital of Benguet province, located 6 miles north of Baguio City, the Summer capital of the Philippines. Also in 1956 Rica, preached her first sermon at the Cabanatuan City Church of the Nazarene, the mother church of the denomination in the Philippines at the age of 18.

After 4 years studying at LNBC, Rica graduated in March 1960. On 24 March 1960 Rica married Rev. Andres Castro “Andy” Valenzuela, pastor of the Guisad Church of the Nazarene, Baguio City, who was a member of the 2nd LNBC graduating class in 1958, and was the youngest of the first group of 7 ordinands in the Church of the Nazarene in the Philippines in 1958. Rica shared pastoral ministry with her husband while focusing on music ministry with the children of the community. During their pastorate at the Guisad church, their elder child, Abner was born in the Baguio General Hospital.

At the 1961 Philippines District Assembly, at the age of 22, Rica was the first woman to receive a district minister’s license in the Philippines. Also in 1961, when baby Abner was just 6 weeks old, Pastors Andy & Rica accepted the call to pastor the Church of the Nazarene in Agbannawag, Rizal, Nueva Ecija, 90 miles southeast of Baguio City, where their daughter Dr. Brenda Verceles Valenzuela, was born. During this pastorate, Rev. Andy founded the Tabuyoc Church of the Nazarene in Pangasinan province, 40 miles south of Baguio City, in October 1966. 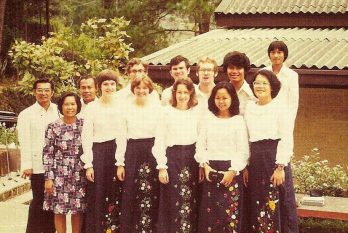 After the decision by the Mission Council to recommend the indigenization of the leadership of the Church of the Nazarene in the Philippines, in March 1967 Rev. Andy was elected Assistant National District Superintendent of the Philippines District on the 3rd ballot. Nazarene historian Dr. Floyd Cunningham opined that “the strength of her character and influence was one factor leading Filipinos to elect her quieter husband as Assistant National District Superintendent”. Subsequently, the Valenzuelas resigned the Agbannawag church, and the family relocated to Binalonan, Pangasinan, where Rica became the Pastora. After a year traveling with Mission Director Rev. Robert McCroskey, Snr., in March 1968 Rev. Valenzuela was elected the first Filipino DS in the Philippines in a near-unanimous vote.

In 1976 Rica attended Pacifican Colleges, a United Church of Christ in the Philippines school located in Villasis, Pangasinan. In January 1976 the General Board elected Rica as the Intercontinental Zone II representative to the General Council of Nazarene World Mission Society (now Nazarene Missional International), and after attending the General Assembly held in Dallas, Texas in June 1976 Pastora Ricareda was elected as the 1st Asian representative to the General NWMS Council of the Church of the Nazarene, serving 2 terms until June 1985, initially for the then Asia Region, and subsequently for the Asia-Pacific Region. In June 1980 Rica gave a personal testimony at the General Assembly in Kansas City, Missouri; and was a featured speaker at the 1985 General Assembly in Anaheim, California, sharing before almost 65,000 delegates and visitors. 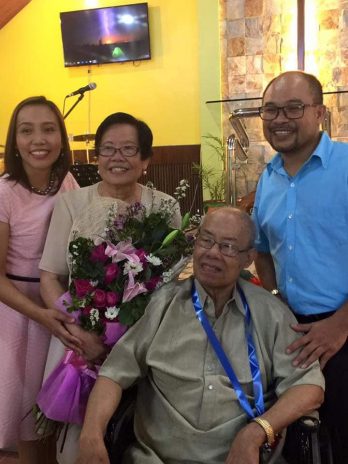 After Rev. Andy became the first DS of the Metro-Manila District Church of the Nazarene in March 1980, the Valenzuelas relocated to Metro Manila, where Pastora Rica pastored the Central Church of the Nazarene in Cubao and was also the first District Nazarene Children’s Ministry Coordinator. The Valenzuelas both enrolled in Masters degrees at Asia Theological Seminary in nearby Quezon City but also enrolled in the first class of Asia-Pacific Nazarene Theological Seminary (APNTS) when it commenced classes in November 1983. The Valenzuelas received Distinguished Service Awards from the Metro Manila District in 1983, and from the Philippines Luzon District in 1987.

After Rica’s graduation from Asia Theological Seminary with a Master of Religious Education in 1986, Rev. Andy resigned as DS of the Metro Manila District early in 1987, and the Valenzuela family migrated to northern California to minister to the Filipino community, where they co-founded the New Life Church in Vallejo, California, serving there until they retired in 2008. They relocated to Silverdale, Washington in January 2015 to live closer to their daughter and her family. After Rev. Andy had his first stroke on 25 August 2015, Rica became his primary caregiver.

In June 2017 they returned to live in their hometown of Tabuyoc, Binalonan, Pangasinan. During this time, the Valenzuelas, who previously received Distinguished Service Awards from both the Metro Manila District (1983 & 1984) and the Philippines Luzon District (1987), were honored again on Sunday 27 August 2017 in a special service at the Tabuyoc Church of the Nazarene, and again on 5 October 2017 by their first alma mater Philippine Nazarene College (formerly Luzon Nazarene Bible College) when PNC OIC alum Rev. Allan Prado presented them with plaques of appreciation.

After the passing of her husband of 58 years in October 2018, Rica relocated to Silverdale, Washington, USA to be closer to her daughter and family.

A viewing will be held from 3-5pm on Sunday, August 25, 2019, at the Lewis Funeral Home, 5303 Kitsap Way, Bremerton, WA 98312 prior to a memorial service and reception.  As her desire was to be buried with her late husband in the Philippines, a memorial service and funeral are planned for February 2020 in Tabuyoc, Binalonan, Pangasinan.