The Other Side of the Boat 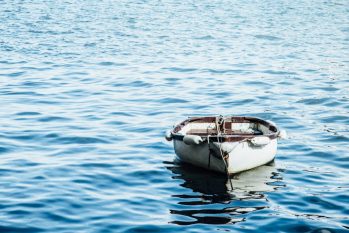 “He said, ‘Throw your net on the right side of the boat and you will find some.’ When they did, they were unable to haul the net in because of the large number of fish.” – John 21:6

After the Resurrection of Jesus, the Gospel of John focuses extensively on the disciples. This is definitely a shift, since the narrative up until that point focused on Jesus himself. But after the resurrection the disciples become the focus, and what we see is interesting. Even though they know that Jesus is alive, they seem to be adrift. In Chapter 20 they lock themselves in a room out of fear, and here in John 21:1-6, they decide to go fishing. After all, it’s what several of them know best. It would at least give them something to do.

Unfortunately, they have little success. After several tries they find themselves unable to catch anything. It’s at this point that the risen Christ appears on the shore, calling to them to throw their nets on the other side. When they do this they catch more fish than they can possibly manage. All it took was a reframing of what they already understood.

It seems amazing to me that the disciples could fish all night, and never once think to do something as simple as throw their nets on the other side of the boat. Maybe it never occurred to them. Maybe it did, and they dismissed it as being pointless. I like to imagine that, after the miraculous catch of fish, one of the disciples smacked Peter on the shoulder and said, “I told you we should have tried that.”

The point is that it took the risen Christ to show them a new way of doing what they thought they already knew. The disciples had already done what came naturally, and it had gotten them nowhere. Christ had to step in and help them to relearn how to fish. It is significant that it was not a very complex change. They just had to try it from another angle. For all their knowledge, they were unable to see what must be done.

In professional ministry we often do the obvious thing. We learn best practices, methodology, and trends that serve us well. Like the disciples who knew to get in the boat and go fishing, we know the basic shape of what must be done. And yet our goal eludes us. We do everything right, and still find ourselves coming up empty.

But everything changes when we listen to Jesus. It is Jesus who ultimately tells us what must be done. Through the Holy Spirit, our knowledge is put to use in ways that we could never manage on our own. The difference between action through human understanding and action through the Holy Spirit, is the difference between futility and Kingdom work.