The following is an excerpt from the book “The Golden Triangle”, about the work of the Church of the Nazarene in Thailand.

The rain had been falling for days. Forty-three years had passed since Thailand had experienced such a heavy rainy season, and this one would not soon be forgotten. Four dams had burst,  destroying farmland and homes. Many people were being flooded from their homes. Even so, when the invitation came for the Church of the Nazarene to visit three Red Lahu villages, it was impossible to refuse. These villages, located high in the mountains of northern Thailand in an area known as the Golden Triangle, had been completely unreceptive to any approach by Christians in the past, but God was answering prayer.

It was agreed that Sam Yangmi, Eric Kellerer, and three Lahu men would make the trip. The truck was loaded with supplies, and we were on our way. After three uneventful hours on paved roads, we parked the truck at the entrance to a dirt road. Many people were gathered there, selling and trading, and they immediately came to look us over. After the usual casual greetings, we asked, “Can we make it to Sheh Taw village?” With few exceptions, the people said it would be impossible.

Knowing that God wanted His Word preached to these villages, we decided to attempt to reach them. Locking the hubs of the four-wheel-drive truck was the first and easiest thing that we would do for the rest of that day. We managed to get a full 75 yards down the dirt road before we had to put the mud chains on all four wheels. Twenty minutes later, we were underway. However, after another 50 yards, we were digging ourselves out of the mud.

Four hours later, we had gone a total of 3 miles, and we had about 12 miles to go. It started to rain again, so we decided to turn back, but we had not yet given up. The next morning, we were up early, ate a good, hot and spicy breakfast, and drove to the river. There is something both majestic and terrifying about a river at flood stage. At times it looked like a muddy, peaceful river, but parts of homes and floating trees were testimonies to the crushing power of the water upstream.

However, the flood didn’t seem to bother the boat driver. In no time, we had loaded the long-tail boat with our supplies and crowded in for the trip upstream. Somehow, we sensed that there was a supernatural Copilot in our boat that day. Despite the destruction that we pushed through for the next two hours, we all knew that God was leading us and that this was His chosen time for these three villages to hear His Word. We stepped off the boat, not knowing what to expect. The next 24 hours were filled with sipping tea, sharing stories, and slopping through the mud from one village to the next.

The highlight of the trip was sitting together in the light of the fire talking with the headman of Sheh Taw village. After much storytelling, laughter, and illustrations, he looked at Sam Yangmi and said, “I want you to know you are welcome here, not just as a visitor, but as my son who has been gone for a long time and has now returned. While you are here in our village, you will be called ‘Ca Naw Kha – The Golden Awakener.” In the few short hours we had in these villages, the leaders of the villages realized that the truth for which they had been searching was contained in the Word of God. 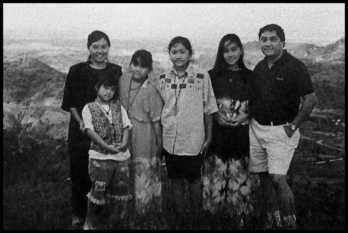 The next day we slid through the mud down the mountain and back to the waiting boat. We knew we would come back to these villages. We knew there was much work to be done, but we also knew we had witnessed the beginning of something great the Lord had done.

It would be inappropriate to leave the reader of this chapter with the impression that this event just happened on its own without any prior contact, prayers, or groundwork. What we witnessed in those three villages is the result of years of seed planting and nurture. It is the result of God’s incredible orchestration of events in the lives of individuals, as well as the leadership of the Church of the Nazarene. As is so often the case, God began to plant a seed in Thailand long before our arrival. Many years before, the Church of the Nazarene was officially registered in Thailand. God had already chosen one of the missionaries who would play a key role here.

Samuel Yangmi was born in southern China to Chinese Lisu parents, who were fleeing the Communists in China in 1955. Knowing the danger they faced, his parents gave him up for adoption to a young lady named Esther Morse, daughter of missionaries Russell and Gertrude Morse. Esther later married a young man named Jesse Yangmi.

Ten years later, the Communists controlled Burma, and the Yangmis and Morses were forced, along with thousands of other Christians, from the country. Denied permission to enter India, they settled in an unadministered border area that came to be known as Hidden Valley. * More than 20 Christian villages were established there until they were forced to leave again six years later.

In 1970 the Yangmis left Hidden Valley for the United States so Jesse could continue his education. So it was that young Samuel attended high school in Joplin, Missouri. In 1975 Jesse and Esther Yangmi went to northern Thailand. A year later, Sam joined them there to help with a revision of the Lisu Bible and do village evangelism.

During his first term in Thailand, Sam did independent missionary work among the Lisu hill-tribe people living near the Thailand-Burma border. He also went from village to village evangelizing among the non-Christians and learning a new language: Lahu. In 1978 Sam married a Lahu girl named Lumae. Their work as missionaries continued with the Lisu people but increasingly took root among the Lahu people as well.

The Lahu people are semi-nomadic tribesmen, having no claim to any part of Thailand as their home. They have their own culture and language and are quite different from their Thai neighbors. The Lahu are at least half a million strong and spread through five countries (Myanmar, China, Laos, Vietnam, and Thailand), numbering about 60,000 in 150 villages in Thailand itself.

The Lahu people believe in many good, bad, and neutral spirits. They also, however, believe in a Supreme Spirit that is above all others. The non-Christian Lahu does not know who this Supreme Being is or how to know Him personally. Sam worked to introduce the Lahu man or woman to the Supreme Being, namely God, through His Son Jesus Christ. Many Lahu came to know Christ and were freed from having to appease the evil spirits through animal sacrifices and the burning of incense because they knew Christ as their Protector and their Lord.

Working with the Lahu made Sam realize the need to have more development work, especially through the education of tribal children and through agricultural projects to replace opium crops, upon which the livelihood of many of the Lahu people depended. So, the Yangmis returned to the United States on furlough, and through God’s direction, they found a school at which Sam could study not only theology but also agriculture. That school was MidAmerica Nazarene College in Olathe, Kansas.

In 1984, when Sam and Lumae left MidAmerica Nazarene College, they returned to Thailand with more than a degree. They returned with a love and appreciation for the Church of the Nazarene. For two terms, God continued to bless their work as independent missionaries. Their work in agriculture and evangelism escalated with the planting of new churches in four Lahu villages and the establishment of the Mae Taeng Tribal Children’s Home.

Most of the remote hill-tribe villages do not have schools. The Mae Taeng Tribal Children’s Home provides an opportunity for children to attend a public school while living in a secure Christian environment. While at the home, the children also receive instruction in the Bible and work skills in agriculture and in raising animals.

Throughout the Yangmis’ time among the Lahu people, they have spent many hours developing relationships of trust and confidence within the villages. As people move from one village to the next, and as children return to their villages after living in the Mae Tang Tribal Children’s Home, the gospel continues to spread among the Lahu people.

Now, many years later, as the Yangmi family is retiring from the field, those influenced by their ministry and service have stepped into Church leadership roles. These leaders, in partnership with the current generation of missionaries, are enthusiastically determined to build on the strong foundation laid for them, by reach the remaining non-Christian Lahu villages with the Good News of the Gospel of Jesus Christ.

This work requires both local and global participation. There are several opportunities for Work and Witness teams to be partners with local churches to reach the unreached by supporting
ongoing outreach ministries and Church planting efforts. In addition to evangelism and outreach, a pastoral training center is in the planning stages; its purpose will be to train and
disciple men and women for Biblical leadership, giving them a strong Biblical and practical education while simultaneously allowing them to serve in ministry.

Of course, the work in the Golden Triangle is not limited solely to the Lahu or other tribal groups. Millions of ethnic Thai people need to hear the gospel as well. The challenge in reaching the Thai in the North is much like that in Bangkok and other areas of Thailand: to reach out to a staunchly Buddhist people and help them see the need for Jesus Christ and the hope and transformation found only in our Lord.

We look forward to starting churches among as many people groups as possible. The Golden Triangle represents a field that is “white unto harvest” with proportionately few workers. The challenge is a great one, but our God is greater!

We are thankful for God’s Word in Rev. 7:9, which describes “a great multitude that no one could count, from every nation, tribe, people and language, standing before the throne and in
front of the Lamb.”

We missionaries rejoice that the Lahu people, as well as other tribal groups, will be among that the throng of people in heaven because of the perseverance and dedication of faithful servants like
the Yangmi family, the persistent and faithful prayers and generosity of the Body of Christ, and the working of the Holy Spirit.

In November 2020, the Yangmi family announced their retirement from Nazarene Missions. To celebrate Sam and Lumae’s life and ministry, this chapter has been reprinted with permission. Kellerer, Eric, Samuel Yangmi, and Brent Cobb. “The Golden Triangle,” Thailand: Land of the White Elephant. Kansas City, MO: Nazarene Publishing House (The Foundry), 1989