“The Best Job we Ever Had!” 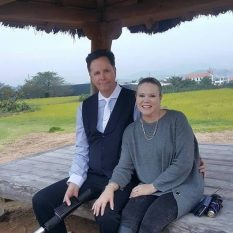 er considered teaching overseas? If so, then you need to spend a few minutes with Shawn and Lisa Campbell! They are convinced that God has lead them to teach at Korea Nazarene University in Cheonan, South Korea. But be forewarned: Their enthusiasm is contagious!

Arriving in Korea in 2015 from the USA, this educator couple initially taught in the city of Daegu. When they decided after one year to move closer to Seoul where their son lives, several universities offered them teaching jobs. Lisa writes “In trying to decide which to accept, we prayed and visited each campus. We both felt called to teach at KNU from the moment we walked onto the campus!” 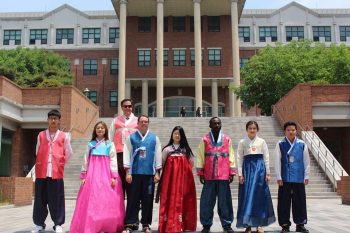 That calling has continued to grow as the Campbells have found many ways to live out their faith and impact students for Christ. Shawn is the International Professor Coordinator for the thirty-one international professors on campus and aims to improve education and student-professor relationships. Lisa is the international coordinator for the Cheonan City, KNU’s Summer and Winter camps.

Aside from these responsibilities, they also serve an active role in the Nazarene Global Leaders Academy (NGLA) programs. Both are a part of the President’s Inner Circle, a focus group that studies ways to improve the KNU experience for students.

Being at KNU has also allowed Shawn and Lisa to minister to students outside of the classroom. They are intentional in building relationships with their students. They leave their office unlocked and stocked with food for anyone who needs a safe and peaceful place to study, rest, or just have something to eat! Shawn and Lisa also join in excursions with their departments, meeting students for activities like bowling, karaoke, and shared meals. 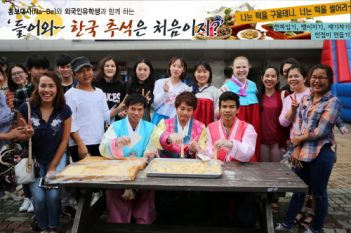 Their greatest joy? Lisa writes “Our greatest joy teaching at KNU is our students. We have been blessed to work daily with amazing students, in a place where we are free to praise the Lord while teaching!

Their greatest challenge? “Our deficiency in Hangul!” says Shawn. “It is our goal to remedy that within the next year. We have hired a private tutor twice a week and have taken classes on campus.” Hangul is the alphabet that has been used to write the Korean language since the 15th century.

Shawn and Lisa have been blessed to see God at work in the lives of those around them. During a summer English camp, one of the teaching assistants approached Lisa and confided that up until that point, he had not followed any religion. “But in this camp,” the student said, “I have understood that God must love me because of the love that you and the teachers have shown to me.” During the camp, the young man accepted God’s love for him and became a follower of Jesus. 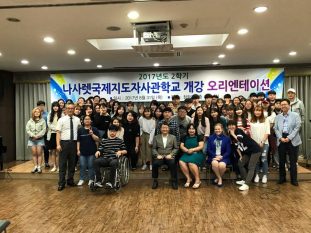 For Shawn and Lisa, it is experiences like this that confirm that God has truly called them to KNU. And they hope to stay until retirement, or until God calls them to move! Both agree: “It is the best job we have ever had!”

Korea Nazarene University, located in Cheonan, South Korea, was founded in 1954 with Dr. Donald Owens installed as the first president. Growing steadily through the years, KNU’s current undergraduate enrollment is around 5,700, making it the largest Nazarene university in the world. It has also found a unique niche in the education of students with disabilities, as well as in providing training for those who desire to work with the handicapped.

Prayer Points:
> Pray for Shawn and Lisa as they continue to serve at KNU.
> Pray for them as they study and learn Hangul.
> Pray for their ministries to the students and the many responsibilities that they have in KNU.
> Pray for Dr. Im, Seung-An, KNU president, as he seeks God’s guidance to lead the university forward.