Solomon Islands:  The death toll from the onslaught of flooding has now risen to 17, with thousands of people being left homeless and dozens still missing, according to a report released by ONE News on Saturday April 5th.

UN Officials estimate that 5,000 people are already in evacuation centers and that whole neighborhoods have been submerged in and around the hard hit capital of Honiara.

The UN further states that their largest challenges will be ensuring that systems are set up at the evacuation centers so that the people have access to safe water and sanitation.

Our missionaries to the Solomon Islands, George and Nancy Miller, released the following report on April 3rd. 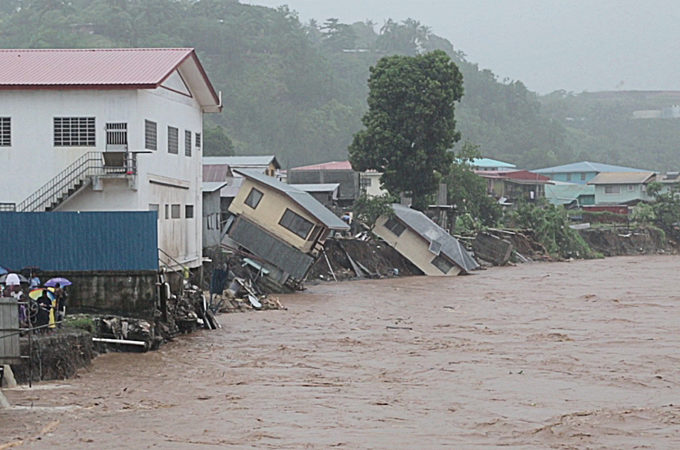 Most rivers in the Solomon Islands are flooding and there has been a lot of flash flooding.

There are two access roads from where we live to the main part of town.  There is an old one lane bridge across the river that has totally washed out.  The other road, the main highway, has a 2-lane bridge, but it is going to be closed soon, if not already.  It will be closed for both pedestrian and vehicle travel.  That means until they assess the problem and repair the bridge we will be isolated from the bank, post office, and the wharf.
They have suspended international air travel because they are using the international terminal as an evacuation center for that area.  Of course the sea is rough due to the weather and so no sea travel.  I have had difficulty with communication to the provinces.  Many homes near the rivers have been washed away.  They have located displaced people in some nearby schools.  Electricity was off about 10 hours yesterday.
The roads are all blocked with debris and water.  I’m sure my land cruiser could get though but I’ve been home packing etc.
About our church work:
I talk with Pastor Osborn and Pastor Jeremiah from White River.  White River flooded and the place where our church meets was flooded and under water.  Jeremiah’s house is near the river and so his family stayed with Osborn last night.  Osborn works in his second job on our side of the river and so will not be able to work.
Pastor John Zedrach from Macedonia in the Guadalcanal plains called and told me that their river washed all their gardens away and did a lot of damage. The people there are all safe.

Please continue to pray for our Nazarenes and the people of the Solomon Islands.