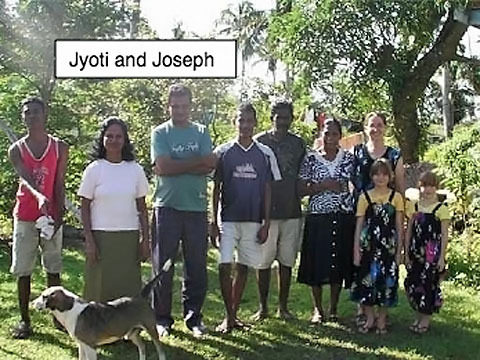 Is it a greater miracle to see God heal someone or give them the courage to give away a meal when they hardly have enough for themselves? The way that God is working through a pastor named Jyoti in the western coast of Fiji is truly amazing, according to David and Rosie Kerr, Nazarene missionaries in the Asia-Pacific Region.

Jyoti started a church with her husband, Joseph, that grew to around 70 members. Jyoti and Joseph are Hindi speakers, descendants of Indian laborers brought by the British to grow sugar cane. These ethnic Indians face widespread discrimination in the Fijian society, and life is hard. The church plant served as a great encouragement in the face of these difficulties.
But then it came to a halt. A church split developed over disagreements between members, and it ended up dying out completely.
Jyoti didn’t accept this failure, and, through the prompting of the Holy Spirit, started another church. This new house church grew up under her teaching, and now has about 12 members. Joseph is involved as well, using his gift as a musician to lead worship in the new church. From the confines of Jyoti’s small house church, the church and the Spirit is spilling out and overflowing.
The Lord spoke to Jyoti about bringing food to some elderly and ill shut-ins in the community. She obeyed, in spite of the fact that her family doesn’t have extra money or provisions. She began cooking meals and taking them to the shut-ins once a week. God – who is always faithful – responded in turn:  while she usually has to go to the market every week or 10 days, Jyoti hasn’t needed to buy provisions for three weeks. Meanwhile, people in this community have the chance to see what God’s love really looks like instead of just hearing words about it, words that are all too often disconnected from the difficulties of everyday life.
Jyoti’s brother was one of those in the Hindustani community who had heard enough of those disconnected words. In spite of Jyoti’s persistent and faithful witness, he did not have any interest in hearing about God’s love expressed in Jesus. But one day when Jyoti was visiting him, he asked her to visit his neighbor, who was pregnant and ill. She had been told that there was no way she would have a healthy baby and that the child was going to die.
In the Hindu worldview there are many gods to worship – Jesus is considered just another one of those divine manifestations. This woman, much like the woman with the constant flow of blood in Mark 12, had done everything she could to please all the gods she could think of, but nothing had helped. Jyoti’s brother, meanwhile, had faith to believe that God might heal someone else, even if not himself.
In the end, both of them saw a true picture of God as opposed to the false ones offered by their culture. Jyoti did visit the woman. Rather than breezing in and out, offering some easy words of consolation and prayer before shooting on to the next stop in her busy schedule, she stayed for two hours. This kind of personal, caring interaction is so important in discipleship – in Hindi culture or anywhere. At the end of her visit, she prayed for healing in Jesus’ name.
She heard from the woman about a week later: both the mother and baby were completely healed. The woman was excited to come to Jyoti’s church, declaring to her, “You are our pastor!” She didn’t have a way to get to church on the following Sunday, however, so Jyoti was about to call a taxi that she would have had to pay for herself. But the woman told her that Jyoti’s brother had decided to come to church as well, and was already at the house waiting for them in his truck.
Whether it’s in a seemingly simple act such as giving a meal to someone in need, or a more supernatural miracle such as physical healing, God is with us, and He desires to work through His saints to set people free, just as He always has.